The Monterey Symphony opens the 70th Anniversary Season with a magnificent program of powerful music, led by Maestro Max Bragado-Darman. The majestic music of Richard Wagner highlights this program with “Siegfried’s Rhine Journey,” an orchestral excerpt from the fourth installment of the epic Ring cycle, Götterdämmerung.

Also featured are Death and Transfiguration, Op. 24, by Richard Strauss, and Symphony No. 1, Op. 10, by Dimitri Shostakovich, the first of his fifteen symphonies, composed at age nineteen while studying at the Leningrad Conservatory. Experience the profundity of the full Romantic orchestra as the Monterey Symphony opens a season of magical music with powerful excitement!

Max Bragado-Darman states, “I feel privileged to continue leading this orchestra for another five years. I work with a dedicated, talented group of musicians. We all share the same love and passion for bringing beautiful music to this community, and I can’t wait to introduce the 70th Anniversary Season to our patrons in October!” 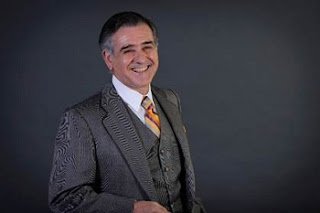 Max Bragado-Darman Biography
Max Bragado-Darman has served as the Music Director and Conductor of the Monterey Symphony since July 2004. Mr. Bragado-Darman was Music Director and Conductor of the Symphony orchestra of Castile and León in Valladolid, Spain, for nine years. From its formation in 1991, he built it into one of the most prestigious orchestras in Spain. Under his direction, the orchestra performed for enthusiastic audiences in all the major cities of Spain, Portugal, Switzerland and Germany. He recorded with this ensemble many unknown works of the Spanish repertoire as well as most of the orchestral works of Turina and Rodrigo on the Naxos label.

In May 1995, Max Bragado-Darman was appointed Music Director and Conductor of The Louisville Orchestra. Under his direction, the orchestra grew in popularity due to his rapport with audiences, the community in general, and his innovative programming. He has worked with distinguished artists such as Alicia de Larrocha, Teresa Berganza, Horacio Gutièrrez, Elmar Oliveira, Dubravka Tomsic, Andre Watts, Angel Romero, Gary Graffman, and Aaron Rosand among many others.

As a guest conductor, Max Bragado-Darman has performed in the United States with the symphony orchestras of Honolulu, San Diego, Nashville, Delaware, West Virginia, Cedar Rapids, Savannah, Oklahoma City, Fort Worth, Austin, Fresno, and Boulder. He has led the National Orchestra, the Radio Television Orchestra and most other orchestras of Spain, as well as orchestras in Portugal, England, Argentina, Germany, and Mexico. In the fall of 2003, he made his debut at the distinguished Wexford Opera Festival with the Granados opera “Maria del Carmen,” in a version he researched and edited himself.

His conducting career has been guided by the knowledge he received from teachers and musicians such as Robert Fountain, Robert Baustian, George Szell, Igor Markevich and Franco Ferrara. Most recently, Max Bragado-Darman has appeared on the podiums of orchestras in Monterrey, Mexico and Mexico City. In the spring of 2009, in the heart of Andalucia he took on the challenge of presenting a fusion of flamenco and classical music featuring a pianist, guitarist, dancer, and full symphony orchestra. He has been the conductor for the prestigious “Iturbi Piano Competition” in Valencia, Spain for the last two editions.

Max and Mary Bragado have two children: Julio who was formerly a dancer with The American Ballet Theatre and is now studying acting in New York City, and Ilia who teaches dance in Valladolid, Spain and is married to José Manuel Concejo. They have two grandsons, six year old Max and 4 year old Alejandro. Both are enchanted with “Abuelito” and “Granny.”

There is a special event to celebrate the 70th Anniversary held by the Friends of the Symphony.

• Sunday, October 18th
• 5:00 p.m. start time
• Held in the foyer of the Sunset Center in Carmel-by-the-Sea
• Event includes Monterey Symphony Chamber Players, Live Auction, Spectacular fare from Portobello’s as well as complimentary wine and champagne
• The event costs $70.00 per person to attend
• Event tickets can be purchased by calling (831) 646-8511 or at www.montereysymphony.org/specialevents

A program entirely comprised of American composers will be featured for the second concert program of the 70th Anniversary Season, starring the amazing talent of young pianist Orion Weiss, named the Classical Recording Foundation’s Young Artist of the Year in 2010. Weiss will be performing Piano Concerto No. 2 by Edward MacDowell, a highly regarded American composer who served as a professor at Columbia University.

This program also includes Aaron Copland’s Letter from Home, a lesser-known work composed in 1944 for soldiers abroad, and Symphony No. 2 by Charles Ives, the progressive New England composer who receives less attention than he deserves. Come hear this tremendous program of American brilliance and expression rarely heard.

The Symphony’s third program will feature the diverse talents of our very own Farkhad Khudyev, Music Director for Youth Music Monterey, who will conduct his own composition, written in honor of our 70th Anniversary Season: The Sounds of Eternity. We are honored to present local audiences with an opportunity to hear this young composer perform his own work in its world premiere live on stage with the Monterey Symphony!

Khudyev will also lead the Monterey Symphony in Beethoven’s monumental Symphony No. 7, Op. 92, and his own brother – Emil Khudyev, clarinetist – in Mozart’s Clarinet Concerto in A Major, KV 622. Do not miss this unique and exciting opportunity to balance a world premiere with timeless classics.

Voices return to the stage with the Monterey Symphony! The Symphony will present an engaging program for the fourth concert program of the 70th Anniversary Season, led by our Music Director Max Bragado-Darman, featuring works by Brahms, Ravel, and Granados. Appearing with the Symphony will be Jennifer Johnson Cano, mezzo-soprano, lauded for her radiant, intense, and rich voice; and the Cabrillo College Choir, prepared by its director Cheryl Anderson.

The beautifully warm Alto Rhapsody, Op. 53, by Johannes Brahms is featured, Maurice Ravel’s Daphnis et Chloé, Suites 1 and 2, and the Dante, by Enrique Granados will add a thrilling touch to this monumental program.

Winner of the coveted gold medal at the Fourteenth Van Cliburn International Piano Competition in 2013, Vadym Kholodenko takes the stage with the Monterey Symphony for the fifth concert program of the 70th Anniversary Season. Kholodenko will amaze our audiences with his virtuosic performance of Beethoven’s masterwork the “Emperor Concerto.”

The Symphony in E-flat, Op. 50, by the prolific German Neo-classicist composer Paul Hindemith completes the first half of this concert program, guaranteed to thrill audiences and musicians alike. Don’t miss this chance to hear one of the worlds’ most acclaimed young pianists perform perhaps the king of all concertos in a riveting concert experience!

Celebrated violinist Anne Akiko Meyers will illuminate the stage with the Monterey Symphony in the final concert of the 70th Anniversary Season in brilliant fashion. Known for her artistry and ability to connect with audiences, Meyers is a best-selling recording artist with over thirty albums in her discography. She will dazzle our audiences with Ravel’s Tzigane, a fantastical and rhapsodic masterwork that is thrilling from the first note to the last!

Rounding out the program are four works from the genre of the capriccio, humorous pieces of music that joyfully celebrate the completion of seventy years of “Great Music Live” in Monterey. Dvorák, Saint-Saëns, Rimsky-Korsakov, and Tchaikovsky are all featured, each displaying the delightful moods and colors of orchestral music. Come experience one of the most joyful and engaging programs a “capricious” final concert of this magical 70th Anniversary Season!

The mission of the Monterey Symphony is to engage, educate and excite our community through the performance and continual discovery of symphonic music.

The Monterey Symphony, under the artistic leadership of Music Director & Conductor Max Bragado-Darman, is the only fully professional, full-season orchestra serving the communities of the Monterey Bay, Salinas, Salinas Valley, Big Sur, and San Benito County. It provides triple performances of a six-concert subscription series at Carmel’s Sunset Theater and Salinas’s Sherwood Hall, as well as youth education programs that include visits to classrooms by musicians and culminate in full-orchestra concerts for schoolchildren.