Booneville, KY, October 02, 2015 — The guys in Shotgun Holler aren’t given to sporting retro-rustic looks featuring suspenders, vests or bowler derbies. They feel no need to dress a part; that’s for actors. As soon as these five players start plucking their instruments and merging their voices in close harmony, they provide all the evidence necessary to establish their bluegrass bona-fides.

Besides, as they make clear on their debut album, Loaded, they like to go where tradition meets authenticity — and jump right over that intersection to head in their own direction. Releasing Sept. 18 on Lonesome Day Records’ new Dry Lightning imprint (with Sony RED distribution), the album is already earning serious attention. SiriusXM’s Bluegrass Junction has been spinning Shotgun Holler’s version of the Guy Clark/Darrell Scott tune “Out in the Parkin’ Lot,” an ode to what goes on outside those honky-tonks, in heavy rotation since June. Since the beginning of September, the band has joined program director/host Kyle Cantrell in the studio for a “track by track” discussion, which started airing on September 25th, several times a week. 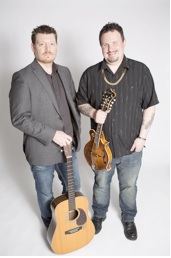 “Shotgun Holler is bringing bluegrass a freshness I haven't heard in a long time,” says Cantrell. ”This is the sound that will help take the music to the next level.”

In July, they appeared on CMT’s Josh Wolf Show, where they delivered a masterful rendition of the “guilty pleasure” song: Miley Cyrus’ “Wrecking Ball.” The fact that their version of the pop hit brought a totally new dynamic to the original speaks to the depth of this band’s talent — not to mention their propensity for tweaking conventional notions of bluegrass while having a little fun.

As for those “bona-fides,” this band’s got too many to list. Mandolinist Shawn Brock, born and raised in the Appalachian hills of Harlan County, Ky., has performed with some of the top names in country and bluegrass. He’s also a jazz player. His Shotgun Holler co-founder, guitarist/lead vocalist Matt Jones, is an Indiana native who grew up hanging out with, and learning from, many bluegrass greats. They’re supported by bassist/harmony vocalist Rod Lunger (another Kentuckian), banjo player Nathan Treadway (an Indiana farm boy) and fiddler/harmony vocalist Alex Benefiel (an Indiana state fiddling champion).

With producer Jim Van Cleve, they’ve crafted a knockout inaugural that is indeed loaded. On three Jones-penned originals (“I've Got Ramblin’ On My Mind,” “Miners Grave” and “One Lone Tree”) and eight other carefully chosen snapshots of life, they enter rich emotional territory, bringing to life an array of all-too-real characters: truckers, coal diggers, dirt farmers, men facing assembly-line futures … some of whom go off to serve their country — or serve time. The band gets poignant in the waltz-tempo “This Side of the Grass,” a heart-tugging tale of a mourning husband and father, and “One Lone Tree,” reflects on a life that didn’t end up as glamorous as it once looked from a simple Kentucky home.

In songs such as Son Volt’s “Methamphetamine,” Jason Isbell’s “Relatively Easy,” “Clovis Johnson’s Old Red GMC” and the ever-evolving classic, “My Bucket’s Got a Hole in It,” they sing of addicts, suicides, moonshine-making reprobates and lonely, hooker-loving men with regrets. Oh, and romancing one moonshine-maker’s daughter. You’ve gotta have a love song, after all even if the title does reference a truck.

With the release of Loaded, Shotgun Holler is ready to fire away.

“Out In The Parkin' Lot”

“I Hope Heaven Has a Holler”

“My Bucket's Got A Hole In It”

“I've Got Ramblin On My Mind”

“This Side Of The Grass”

“I Should Have Started Yesterday”

About Dry Lightning Records
Dry Lightning Records was established to give a broader range of Lonesome Day Records artists their own home while allowing the original label to continue building on its 12-year history in the bluegrass market Founder Randall Deaton now puts as much passion and energy into Dry Lightning Records as he still devotes to the label he founded in 2002. In partnership with Sony/RED Distribution, the label also includes the critically acclaimed acts Girls Guns and Glory and Sarah Borges. Both Dry Lightning and Lonesome Day, incidentally, take their names from the titles of Bruce Springsteen songs.