The Ann Wilson Thing! - Live at The Belly Up available now exclusively at BellyUpLive.com and via all digital outlets January 29

The Ann Wilson Thing!, Heart frontwoman Ann Wilson’s solo project, is proud to announce the digital live EP, Live at The Belly Up is available now at BellyUpLive.com!

Los Angeles, CA, January 26, 2016 - The Ann Wilson Thing!, Heart frontwoman Ann Wilson’s solo project, is proud to announce the digital live EP, Live at The Belly Up is available now at BellyUpLive.com! It will be released through all digital outlets on January 29. Recorded at Solana Beach, CA’s legendary Belly Up nightclub, the EP features seven riveting performances that refresh works by artists from Bob Dylan to Aretha Franklin and everywhere in between. 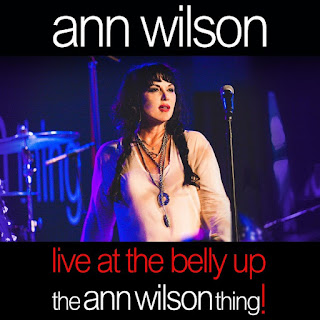 Ann Wilson’s musical gifts are legendary. As a songwriter and lyricist, she has created a truly impressive body of work (“Crazy on You,” “Barracuda,” “Magic Man,” “Straight On”, “Mistral Wind,” and many, many more). However, her greatest gift and first calling is singing. Her voice is considered to be among the best ever, with its vast range, amazing power, and sheer musicality. It has inspired legions of great singers across every genre of music.

Ever since Heart’s debut, Dreamboat Annie, Ann has been performing with her equally talented sister, Nancy Wilson, thrilling hundreds of thousands of concert fans annually. In September 2015 Ann’s “passion project” The Ann Wilson Thing released it’s first EP, #1, and embarked on her first solo tour ever, with stops in intimate venues across the country throughout September and October.

"The first night at the Belly Up in Solana Beach was a real thrill for me. It was so satisfying playing these songs to an excited, sold out house! Unforgettable,” states Wilson.

Now available exclusively from Belly Up Live http://bellyuplive.com/AnnWilsonThing!.php and available via all digital outlets on January 29.

Video Performance of “For What It’s Worth”: https://www.youtube.com/watch?v=C6ERqYLmOUc

When describing the nature of her solo shows and what fans can expect, Ann explains, “In The Ann Wilson Thing, we do music that has always inspired me. Songs written by people who I feel are master lyricists , like Bob Dylan, Peter Gabriel, John Lennon and Neil Young. We also do originals, and songs that aren't even in the rock box.”

For more information on “Live At The Belly Up” please visit:
www.theanwilsonthing.com
www.bellyuplive.com