Los Angeles, CA, March 14, 2016 — Formerly the front man of the Dance Hall Pimps, RJ Comer redefines his musical style with a stripped down version of Americana Rock. RJ released his new single “Nightly Suicide” on February 26th with an accompanying music video due out March 7th. This is first single off of his upcoming EP also named, Nightly Suicide and will be released on March 25th.

The metaphorical title track is RJ’s homage to Charles Bukowski—the poet laureate of barflies. The song also illustrates RJ’s early life, which he describes as “a lot of heavy drinking and nightly self-destruction.” Comer’s gritty, soulful vocals and dark riffs authentically convey the stark and sometimes surreal lyrics and imagery of the song. 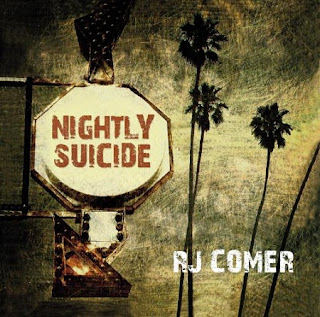 “I like songs and music videos that tell stories; they put the emotion of the song in a more powerful context than just singing ‘I feel this way; I feel that way.’”—RJ Comer

The music video is inspired by Bukowski’s screenplay Barfly. Marcos Tinez plays the younger RJ, a lonesome alcoholic who is wearing the identical hat RJ is wearing in other clips of the music video to connect past and present. Directed by Guillermo Rodriguez, “Nightly Suicide” was filmed in Granada, Spain and at Los Angeles’s legendary music venue, The Mint.

The soon-to-be released EP Nightly Suicide will be available for presale on March 11th.

RJ has toured as a solo artist from British Columbia, Canada to New Orleans. His powerful voice, his captivating and emotional live performances, and his infectious songs have garnered fans in biker bars, on Bourbon Street, and in coffee houses and opera houses. Talents as diverse as A.J. Croce, C.C. Adcock, and Grammy-winner Matt Hyde have produced tracks with RJ.