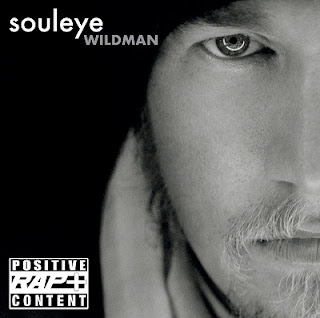 Wildman represents a mindful and musically engaging listening experience. A socially conscious artist, Souleye delivers an innovative and intense lyric flow that drips with passion. His clever references outline a positive sense of being. In “Follow Your Heart,” the debut single from Wildman, Souleye discusses overcoming hesitations with self-awareness and self-motivation in order to follow your own passions. His rhythmic lines weave in and out of the down-tempo grooves and musical stylings of Crush Effect. Molloy and Veith blend elements of electronic, R & B, hip hop, and trip-hop to create a psychedelic and atmospheric album that occupies the space between a traditional compilation record and a concept album.

“One of the reasons so many pop and hip hop albums don’t sound cohesive is that those 12 tracks were recorded in 12 different studios with 12 different producers,” says Veith, of Crush Effect. “It was nice to do a full record, to build that sound from song to song.”

Souleye is a one-of-a-kind artist making a statement in the hip hop and electronic scene. He continues to shape his signature style with inspiring and poetic rhymes. His carefully selected collaborators offer creative instrumentation that only enhances Souleye’s enlightened lyrics.

About Souleye
Souleye’s musical journey began when he was a teenager in rural Massachusetts, freestyling around a camp fire to entertain his friends. Blending traditional elements of hip hop, EDM and numerous other styles; Souleye’s music crosses the boundaries of genre, defies convention and inspires listeners with uplifting lyrics coupled with both traditional and unusual hip hop beats and samples. His first album, Soul Sessions was released in 2002. Since then, Souleye has released eight studio albums and numerous singles. Souleye has toured extensively with Bassnectar, shared the stage with the Glitch Mob, Tipper, Michael Franti and his wife, Alanis Morissette, with whom he has two children. For more information, visit souleye.net.