Carmel Student Nelly Kohlgrüber Felt a Sense of Urgency When it Comes to the Environment, so she Did Something About it

Carmel High School senior Nelly Kohlgrüber felt the need to take action and bring the issue of climate change and environmental damage to young people as well as the community at large.

Carmel, CA, March 11, 2019 — Carmel High School senior Nelly Kohlgrüber felt the need to take action and bring the issue of climate change and environmental damage to young people as well as the community at large.

Kohlgrüber was feeling an increasing sense of anxiety in her science courses, combined with the current state of ambivalence in our nation towards science and fact, not to mention the drought, fires and flooding California has experienced over the past few years, and she wanted to do something, but she wasn’t sure what. 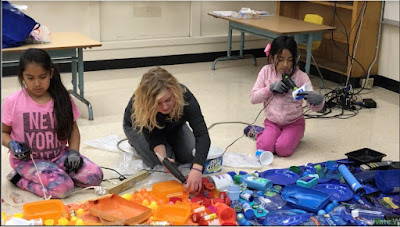 “Many of us can’t vote and we don’t have millions of dollars to pour into issues. We’ve barely made it through calculus, and yet I had to do something,” says Kohlgrüber. “I decided to enlist the help of young people and to teach them about how to incorporate change in their lives in the only way I knew how: art. This was my chance to bring my passion for art and the environment together and raise awareness.”

That idea became The Great Wave of Change, a 12-by-8 foot outdoor mural made entirely from plastic waste. Working sometimes weekly, afterschool and through holiday breaks, students began collecting, cleaning and sorting single-use plastics for materials.

Kohlgrüber had pitched local elementary schools and found enthusiasm with Seaside’s Highland School principal Hecate Rosewood. Rosewood was instrumental in encouraging the project and applauded Nelly’s courage to take on such an endeavor. She then recruited the help of after-care leader, Alejandrina Poole, and those with enthusiasm (and who had finished their homework), to work on the project.

“Students are becoming aware of the amount of plastic in our lives and how much they throw away every day through constructing our mural and exchanging stories,” she says. “We talk about alternatives to dumping plastic in landfills and how to shop smarter. All the while they show me firsthand the positive effects of learning through doing. As my preschool teacher taught us, if it’s not in the hand, it’s not in the head.”

Kohlgrüber says this is an issue where the young can and should take the lead.

“Climate change epitomizes an issue where the young can teach the old. Those in power now will be long gone by the time the worst consequences of climate change occur, and young people will be left to bear the brunt of the chaos,” says Kohlgrüber. “My hope is that through this brief exposure to environmental issues at such a young age, the students might become ocean advocates and use their newfound knowledge to educate others. Hopefully, this project also shows how individuals and grassroots efforts, combined with education, can have a positive impact. In other words, it’s not hopeless.”

Even now, she says, young people are making a difference when it comes to fighting the effects of climate change:

The project has taken approximately 9 months from inception to completion. Installation of the wall is planned for March 31, 2019.