Our new chef Steven Patlan will be rolling out his new menu on March 1st and we would like to introduce him to the community! Additional food photos available.

Carmel-by-the-Sea, CA, March 13, 2020 - Yeast of Eden welcomes their new Executive Chef Steven Patlan, kicking off 2020 with an exciting new menu and specials rolling out March 1st. At age 10 on a kitchen stool next to his mother, Steven discovered that he was always going to cook, and has gained a wealth of culinary knowledge and experience since then. He attended culinary school at the Institute of Technology in Clovis before moving to Las Vegas, sharpening his skills under Alex Strata at Marche Bacchus, and joining the banquet team at Silverton Casino preparing specialty dinners on a private yacht. Following Las Vegas, Steven returned to California as sous chef at Solaire Restaurant in the Hotel Paradox alongside Executive Chef, Ross McKee. In 2012, the Monterey Peninsula beckoned him home to The Inn at Spanish Bay with Executive Chef Todd Fischer, Quail Lodge & Golf Club, the Sardine Factory, Ventana Inn Big Sur, and recently as the Executive Chef at Wild Fish in Pacific Grove. 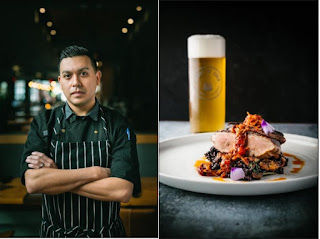 Steven’s goal at Yeast of Eden is to curate a locally sourced menu from a collection of flavors, spices, and fresh ingredients that inspire him. He is intrigued by global culinary destinations that utilize unique ingredients, flavors, and spices including Jerusalem, Turkey, Morocco, and Cambodia. Steven has a passion for pickling and fermenting which will be frequently incorporated into his dishes. He also plans to work closely with head brewer Andrew Rose to synchronize the beer and food offerings by creating dishes that both compliment and utilize beer as an ingredient in their preparation. Steven wants to establish close relationships and source ingredients from local farmers and fishermen, bringing more seafood and fresh, local produce onto the menu. He is an advocate of locally sourced, aquarium approved, and sustainably farmed products and enjoys participating in community events like Meals on Wheels, Rancho Cielo, and the Prevedelli Farm Dinner in Watsonville each September.

In addition to the new menu rolling out on March 1st, Chef Steven will be frequently offering locally sourced specials in our dining room, bar, and dog-friendly courtyard terrace at Carmel Plaza in downtown Carmel. Hours are 11:30am-9:00pm Sunday through Thursday and 11:30am-10:00pm on Friday and Saturdays.