Los Angeles, CA, November 16, 2014 – Seven-time Billboard charting singer/songwriter Margo Rey has re-released her Christmas EP, This Holiday Night including the original title track along with unforgettable classics, “Toy Land” and “Silent Night”. Rey will also be releasing “Es Navidad,” a Spanish version of “This Holiday Night.” After her most recent single “Colours”, an emotional and inspirational song about overcoming obstacles, Rey returns with this holiday release just in time for the season. 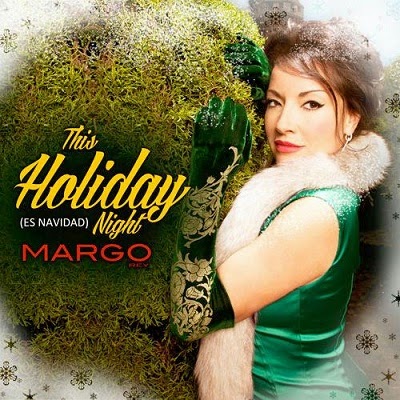 Born in Acapulco, Mexico, Rey puts a unique, Latin touch to this 2014 single of “This Holiday Night” – a Top 5 Holiday classic that has continued to dominate and have major chart success on AC radio. Following her album release of Habit and successfully battling breast cancer for a second time in 2013, Margo never stopped pursuing her music. Margo Rey recently became the National Ambassador for non-profit organization Brides Against Breast Cancer providing her top 20 Billboard charting song, “Let The Rain”, co-written by legendary John Oates as their theme song.

The Indie Music Digest says, “Her musical/vocal style is cut from the cloth of Celine Dion, Bonnie Raitt and Shania Twain.” – but I will add she can go toe to toe with any of them vocally.

Working in the music business since she was only eleven years old, Margo continues to provide an array of her signature rich vocals with smooth tunes and funky beats with every release.