Award-winning South Korea-born pianist David Jae-Weon Huh will be featured in the second program of the Monterey Symphony's six-concert series on Nov. 18 and 19, at the Sunset Center in Carmel.

Monterey, CA, October 24, 2017 - Award-winning South Korea-born pianist David Jae-Weon Huh will be featured in the second program of the Monterey Symphony's six-concert series on Nov. 18 and 19, at the Sunset Center in Carmel.

This concert will also feature a side-by-side performance with members of the Honors Orchestra of Youth Music Monterey County (YMMC).

The season, titled "Concert Grand," under the direction of Maestro Max Bragado-Darman, opened Oct. 14-15, and runs through May 19-20. 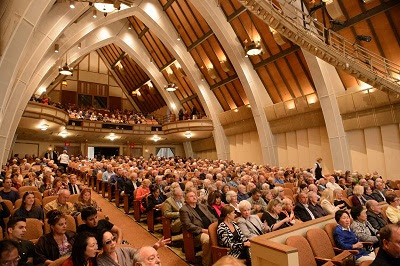 Huh, silver medalist at the 2015 Santander Piano Competition, will lend his talents to Sergei Prokofiev's Piano Concerto No. 3, Op. 26, in this powerful program, which also will include the Symphony's interpretation of Ludwig van Beethoven's Symphony No. 6, Op. 68 ("Pastoral.)

Recognized for his sense of poetry and technical brilliance, Huh has performed extensively throughout Europe, Asia and the United States, and has appeared in numerous festivals, including recitals at Animato den Paris, San Francisco Music Festival, and Leipzig Euro Music Festival, among many others.

This will be Huh’s first appearance with the Monterey Symphony.

Guest pianists in Season 72 will also include Josu de Solaun, Juan Perez Floristan, Phillipe Bianconi, and Michael Davidman, who was selected by guest conductor Conner Gray Covington, who will preside over the March 17-18 program.

All programs will be performed at the Sunset Center (Ninth Avenue, between San Carlos and Mission streets) in Carmel at 8 p.m. on Saturdays and 3 p.m. on Sundays. Special youth concerts, also at the Sunset Center, have been scheduled March 19 and April 23, with performances at 9:30 and 11 a.m. on each date.

The Monterey Symphony's chamber players will present a holiday concert at 7:30 p.m. on Dec. 7 at All Saints Church (Ninth Avenue, between San Carlos and Monte Verde streets in Carmel).

Here's an in-depth look at the rest of the upcoming season:

Program 3: Feb. 17-18
Josu de Solaun, first-prize winner at the 2014 Enescu Piano Competition, will join the Symphony to perform Camille Saint-Saens' Piano Concerto No. 5, Op. 103 in a concert that also will include Symphony renditions of Johannes Brahms' Academic Festival Overture, Op. 80, and Robert Schumann's Symphony No. 2, Op. 61.

Program 4: March 17-18 (with youth concert on March 19)
Celebrate St. Patrick's Day weekend with the Monterey Symphony and wall-to-wall Mozart, a program that will include the overture from his beloved opera, Don Giovanni.

This concert will be performed under the baton of guest conductor Connor Gray Covington (recently appointed Assistant Conductor of the Utah Symphony) and will include Mozart's Symphony No. 1, KV 16, and Symphony No. 41, KV 551 ("Jupiter").

Covington is currently completing his tenure as the Rita E. Hauser Conducting Fellow at the Curtis Institute of Music in Philadelphia, where he is being mentored by Philadelphia Orchestra Music Director Yannick Nezet-Seguin. He recently made his debut with the Curtis Symphony at Carnegie Hall, sharing the podium with Ludovic Morlot.

Special guest pianist Michael Davidman, selected by Covington, will also be part of this spectacular program.

An avid opera enthusiast, exceptional sight reader, chamber player, and accompanist, he has won numerous first-place awards in various competitions and recently completed the four-year scholarship program with The Chopin Foundation of the United States.

Program 5: April 21-22 (with youth concert on April 23)
Guest pianist Juan Perez Floristan, winner at the 2015 Santander Piano Competition, will showcase his talents with a performance of Johannes Brahms' Piano Concerto No. 1, Op. 83, in a program that also will include the Symphony's rendition of Felix Mendelssohn's
Symphony No. 4, Op. 90 ("Italian") -- a piece Mendelssohn, himself, declared to be the "jolliest" he ever composed. Regarded as a beacon among new generations of Spanish and European musicians, Perez has performed with the Saint Petersburg Philharmonic, Malmo Symphony, Radio Television Espanola, Seville Royal Symphony, Gran Canaria Philharmonic, Malaga and Cordoba Symphonies,  and the Andres Segovia and Spanish National Youth Orchestras.

Program 6: May 19-20
The incomparable Phillipe Bianconi will be at the piano for the Monterey Symphony's final program of the season, performing Franz Liszt's Piano Concerto No. 2. Liszt perfected the art of thematic transformation and took it to an extreme level with this impassioned concerto.

French pianist Bianconi has been described as an artist whose playing is “always close to the soul of the music, filling the space with poetry and life” (Washington Post), “an extraordinary exhibition of musicianship, technical control and good taste which lent the music a freshness, immediacy and conviction one all too seldom encounters” (The London Times). After winning the Silver Medal in the Seventh Van Cliburn International Competition, Bianconi made an acclaimed recital debut at Carnegie Hall in 1987 and, since then, has enthralled audiences and critics throughout the world.

Also featured will be Manuel de Falla's lovely Noches en los Jardines de Espana, his most impressionist-style work, which details three gardens in a setting for piano and orchestra.

Chamber Program: Dec. 7 (7:30 p.m. at All Saints Church)
The Monterey Symphony is pleased to offer a special holiday chamber music treat, featuring concertmaster Christina Mok, with selections that include Piazzolla, Beethoven, Mozart, and the Hampton String Quartet's "What if Mozart wrote 'Have Yourself a Merry Little Christmas!" Come have fun and enjoy holiday music in a classical style with the Monterey Symphony chamber players.

The Monterey Symphony, under the artistic leadership of Music Director & Conductor Max Bragado-Darman, is the only fully professional, full-season orchestra serving the communities of the Monterey Bay, Salinas, Salinas Valley, Big Sur, and San Benito County. It provides double performances of a six-concert subscription series at Carmel’s Sunset Theater, as well as youth education programs that include in-class visits and culminate in full-orchestra concerts for school children.

For additional information, please call 831-646-8511 or visit the website: www.montereysymphony.org.


http://www.montereysymphony.org
Posted by Straight Line Public Relations at 12:14 AM