Boulder, CO, October 16, 2019 - Carmel-by-the-Sea’s Yeast of Eden was awarded a medal at the 2019 Great American Beer Festival (GABF) competition, the world’s largest commercial beer competition. The GABF, presented by the Brewers Association, recognizes the most outstanding beers produced in the United States. Gold, silver and bronze medals were awarded on October 5 at the Colorado Convention Center in Denver, in 107 beer categories covering 174 different beer styles (including all subcategories), establishing the best examples of each style in the country. 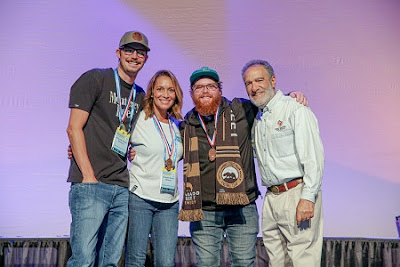 Yeast of Eden was recognized with a bronze medal in the highly competitive Belgian-style Sour category among 91 other entries beer-style category for Saison Apotheca, a farmhouse-style ale brewed with California-grown malts, a blend of Belgian yeast, and a touch of native microflora to create acidity and highlight the terroir of

Monterey county. Considered a “mixed fermentation” beer, Yeast of Eden also brews ales and lagers of many styles, including IPA & Pilsner, but also curates rotating guest beers from some of California’s best.

Yeast of Eden’s sister brewery Alvarado Street in Monterey also received some hardware at this year’s GABF, taking Gold in Imperial IPA for Double Cone, and Bronze in Contemporary American Pilsner for Citraveza.

“What a weekend for our three breweries,” said Co-owner J.C. Hill. “This type of recognition you can only dream about, and it shows how hard our team works to execute these beers. Hats off to our pub brewers, Salinas production team, and the brew staff at Yeast of Eden. Big day for beers crafted right here in Monterey county!”

In the 33rd edition of the GABF competition, 9,497 entries were submitted to the general competition, along with 113 Pro-Am and 70 Collaboration entries. The beer was made by 2,295 breweries from across the nation, with entries from all 50 states plus Washington, D.C., Puerto Rico and the Virgin Islands. Judging took place over the course of three days, with an international panel of 322 judges from 18 countries.

“This year’s GABF competition was the largest and most competitive to date,” said Chris Swersey, competition manager, Great American Beer Festival. “The beers and talent were as impressive as ever, and I’m thrilled to congratulate this year’s winners for their achievements in brewing.”

For more GABF competition information, including the 2019 winners list and photos, visit GreatAmericanBeerFestival.com.