A mural by renowned California artist Jo Mora has been selected for the official poster of the 2020 Monterey County Fair and inspired its theme, “Fiesta.”

Monterey, CA, October 18, 2019 — A mural by renowned California artist Jo Mora has been selected for the official poster of the 2020 Monterey County Fair and inspired its theme, “Fiesta.” 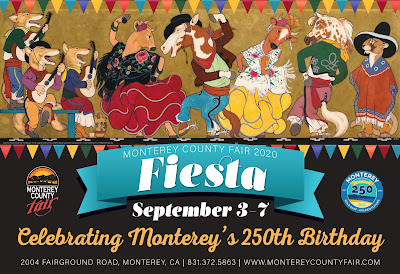 Trotter Galleries in Carmel acquired the complete Jo Mora “Fable” mural collection in 2015 and one of the murals was used as the official poster for the 80th anniversary of the Fair in 2016.

The famed seven-mural suite was originally commissioned in 1936, during the middle of the Great Depression, to enliven the walls of what would be named The Fable Restaurant, located in the former Drake-Wiltshire Hotel in San Francisco. Mora, a Monterey Peninsula artist who was known throughout California for his multi-talented and imaginative abilities of expression, was selected for this important commission.

“The artist’s gift as both a humorist and storyteller is brilliantly conveyed in these murals through colorful anthropomorphic imagery, captivating an audience of any age or background, and are still as relevant today as when he first created them in his local studio 84 years ago,” said Paula Trotter of Trotter Galleries.

Mora (1876-1947) was an artist-historian, sculptor, painter, photographer, illustrator, muralist and author who has been called the "Renaissance Man of the West." Born in Uruguay, Mora and his family moved to Carmel in 1921, where he created the monumental bronze and travertine sarcophagus and altar for Father Junípero Serra that was placed in the Carmel Mission Basilica. A prolific artist, Mora’s sculptures, illustrations, watercolors and etchings were frequently exhibited across the United States. Starting in 1937, Mora wrote and illustrated a number of children's books about the West.

“Somewhere Jo Mora must have been smiling when four years ago one of his Fable murals was selected to celebrate the 80th anniversary of the Monterey County Fair,” said Trotter. “Once again, as Jo always intended, we are all smiling as another of his Fable murals was selected and specially titled ‘Fiesta’ for this year’s theme for the 2020 Monterey County Fair.”