Readers can learn more about Humbled in a series of online book talks hosted by the Monterey County Historical Society.

(eBook planned for release in the near future)

Readers can learn more about Humbled in a series of online book talks hosted by the Monterey County Historical Society. Church and McKenzie will discuss the book, their research, and why they wrote it on Saturday, Oct. 17, at 3 p.m., on Wednesday, Nov. 18 at 7 p.m., and on other dates yet to be determined. During these talks, the authors will donate to MCHS 25 percent of the proceeds from every book ordered from vista-verde-publishing.com. To be included in the Zoom event, email mchs@redshift.com.

Review copies of the book available on request; to read Chapter 1, go to 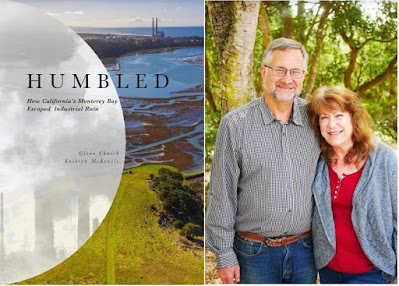 Today, Monterey Bay is a place of beauty and natural splendor, and is protected by federal law as a national marine sanctuary. It’s hard to believe that in the 1960s, plans called for a major industrial complex to be developed at the midpoint of the bay, starting with a refinery that Humble Oil intended as a linchpin of its West Coast operations.

The building permit sought by the powerful company became the focus of a bitter and protracted conflict that divided the region. Most people in Monterey County wanted the jobs and economic stability that big industry would bring. But a vocal minority fought back hard against the industrialization of the bay. The Monterey County Board of Supervisors approved the permit, but ultimately Humble would never start construction.

The controversy was one of the first major battles of the modern environmental movement, and garnered state and national attention, including coverage in the New York Times. It was a critical turning point for the Monterey Bay, home to hundreds of species of sea life, marine mammals and birds.

Church and McKenzie chronicle the Humble affair, starting with plans in the 1950s designating the tiny fishing village of Moss Landing as an industrial center, through the events of 1965-1966 when Humble applied for a permit to build a refinery. The project was turned aside through a concerted effort by environmentalists, farmers, and other residents who felt a refinery would irreparably damage the region’s air and water quality. It also documents the political wiliness of local politicians who simply outfoxed Humble, one of the world’s biggest corporations. Just how this was accomplished makes a fascinating read that is like a textbook for environmental activism.

The book recalls some of the personalities who wrangled over the issue, such as Monterey County Supervisor Tom Hudson, known for his flamboyant antics and love of back-room deals; State Senator Fred Farr, who rose above personal tragedy to fight for the bay that he loved; and famed photographer Ansel Adams, who became a public and outspoken opponent of Humble Oil.

The book began when Church and McKenzie began reading through notes and papers of the late Warren Church, a former Monterey County Supervisor and Glenn’s father, who played a prominent role in the controversy. That led to more than a year of research that revealed the entire picture of exactly what made Humble turn away from Moss Landing.

Humbled can be ordered from vista-verde-publishing.com, at local bookstores, and from major online booksellers, including Amazon and Barnes & Noble.

Glenn Church and Kathryn McKenzie both grew up in the Monterey Bay area and have a deep love and appreciation for the land and the environment. Church, a farmer and businessman, has written extensively about politics and has been active in environmental and international human rights issues. McKenzie, a Monterey Bay area journalist and environmental writer, has been working for newspapers and magazines for more than 35 years, most recently Voices of Monterey Bay, Health Matters and Edible Monterey Bay.

They have been married since 2017, and make their home in North Monterey County on California’s Central Coast. This is their first book.

The Humble Oil incident was the most consequential political battle in our area’s modern history, and people need to know how these events saved local agriculture and preserved the natural beauty of the Monterey Bay for generations to come.

A sweeping epic chronicling circumstances and events that would have ruined the ecology of our region, were it not for the concern and vigilance of those who cared.

It’s hard to imagine what the Monterey Bay — now a national marine sanctuary — would look like today if locals hadn’t taken a stand against Humble Oil in the 1960s. It was a time before “environmental activism” was a term, but the until-now unsung heroes in this story were prescient enough to see disaster looming if they didn’t take action. Humbled shows how a few determined souls changed the course of history, and it should inspire all of us to keep fighting for environmental justice today.