New York, NY, July 15, 2015 - Harlem-based roots rock songwriter/singer Kwame Binea, who fronts the Kwame Binea Shakedown, has announced the worldwide digital release of the group's debut and self-titled EP on Tuesday, July 17, 2015 via CDbaby.com and all their major digital distribution partners including iTunes and Amazon.com. 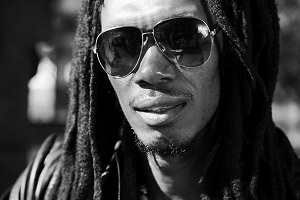 "Kwame Binea Shakedown" features four tracks including the group's first single "Let Go" (released in early April), their most recent single, "Hang On" (released in mid-June) and "Little Lady" and "Waiting," which have never been released. Musically, the EP showcases Binea's "roots rock" lineage, which is a fusion of rhythmic rock n' roll, ample dosages of infectious funk, silky soul, screaming blues and just a smidgeon of reggae and funk.

Binea and Wilcox have been intermittingly writing, recording and performing the songs over the past several years. "We've always viewed ourselves primarily as a live band" explained Kwame. "As writers, we're fueled by how our fans and audiences react to our songs. We take that energy and feedback back into the studio and do our best to channel it into the songs we decide to record. This EP means a lot to us because it's driven by all the love and positivity our fans keep giving us. It's our way of expressing our appreciation and thanks for all their inspiration and support," he added.

Binea, grew up splitting time in West London (his birth place) and in his native origins, Ghana. He later moved to Cherry Hill, NJ as a teenager where he started to unearth his artistic aspirations as a burgeoning songwriter/singer/guitarist. While in college he teamed up with guitarist/vocalist Justin Wilcox as a duo, which became the nucleus that spawned the rock/funk collective Kwame Binea Shakedown in Harlem, NY (2011). Over the past several years they have built a legion of loyal fans performing at most of the city's most noted music venues including Joe's Pub, Arlene Grocery, Rockwood Music Hall and Brooklyn Bowl, to name just a few.

For more information go to: www.kwamebineashakedown.com