Lyric Video Due Out February 24th

Los Angeles, CA, February 23, 2016 - Positive Hip-hop artist, Souleye announces the release of his second single, “Labeled” off of the critically acclaimed album, Shapeshifting. The single will be released February 22nd with an accompanying lyric video, out February 24th.

“Not only is he a brilliantly gifted lyricist, but his music delivers a strong and positive message… Each song off the new album is phenomenal and adds another dimension of depth.” –MuzicNotez 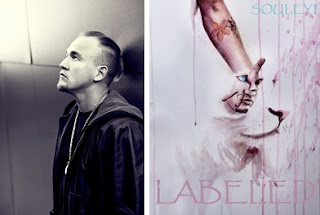 The talented lyricist is well known for his positive and thought-provoking music. Souleye is passionate through every verse and rhyme. His new release touches on anti-bully issues and the relinquishment of animosity between others. Souleye emphasizes a world of peace and happiness by controlling your negative thoughts and anger. “I live life, I don’t let life live me” he continues, “the voice in my head is not me, I change my perspectives and I take a different view,” Souleye says. The track Labeled is for everyone out there who’s ever felt judged by some one before even getting a chance to say hi.

The musical style of “Labeled” accentuates an old school hip-hop vibe with its consistent, down tempo beat and rhythmic rap flow. The melodic chorus ties the whole song together with his conscious thought provoking lyrics and groove.

“Souleye, who takes the tropes of hip hop, whisks them up with contemporary pop sounds and blends with new age inspired lyrics to create something truly unique.” – BuzzJack

Souleye has an exceptional amount of musical background while getting a chance to work with the likes of Bassnectar, MIMosa, STS9, The Glitch Mob and Michael Franti, and his wife Alanis Morissette. He has also performed at Coachella, Ultra Music Festival, Burning Man, Shambhala, and recently at Arizona’s Gem and Jam Festival. Souleye has also toured extensively in the United States, Canada, Europe and South America.

Along with his commitment to his up and coming career, Souleye is a dedicated father to his five-year-old son, Ever Imre and a beloved husband of 6 years to Alanis Morissette. The two have just recently announced that they will be expecting their second child in the Alanis’ touching animated video which concludes with the family of three gazing into the ultrasound at their newest member of the family. For more information please visit Alanis Morissette’s website.