On April 3, from 2-5 P.M., the National Steinbeck Center will host a website launch and panel discussion, moderated by Teatro Campesino founder Luis Valdez, to formally unveil Democracy in the Fields.

Salinas, CA, February 20, 2016 - On April 3, from 2-5 P.M., the National Steinbeck Center will host a website launch and panel discussion, moderated by Teatro Campesino founder Luis Valdez, to formally unveil Democracy in the Fields. This multi-media project tells the stories of farmworkers who joined Cesar Chavez’s movement forty years ago in the Salinas Valley. 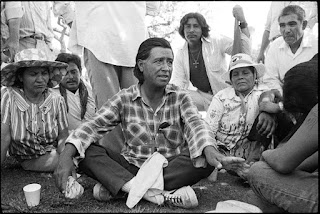 The website features a recently discovered trove of captivating images by award-winning photographer Mimi Plumb. Plumb documented events during the summer and fall of 1975, when a landmark law gave California farmworkers the right to petition for union elections. “Mimi was swept up in the excitement as she watched history unfold. She took hundreds of photos over many months. Then she put the negatives in a box and went on with her life,” notes Miriam Pawel, project coordinator. “Forty years later, she rediscovered the trove of photos, and her curiosity and passion were rekindled. She had taken almost no notes, written down only a handful of names.” The first stage of the website project, adds Pawel, was “to put names to the faces. But as soon as we began sharing the photos, it became clear they were a window into a much larger, important story. Partly because of the memories they evoked, partly because of the transformational nature of that era, and partly because we were showing people photos of loved ones they had not seen in decades.”

In words and pictures, Democracy in the Fields tells the story of Cesar Chavez’s march through the Salinas Valley to spread the word about the historic elections that began in the fields in September 1975, and the impact on farmworkers who discovered their own power. It features workers like Jose Renteria, recruited as a teenager to help in the campaigns of 1975, who grew up to run the UFW’s Salinas office and then to work as Human Relations director of Matsui Nursery; Sabino Lopez, who was an irrigator with a third grade education and became a labor organizer, then deputy director of the Center for Community Advocacy. He was the first farmworker on the board of the National Steinbeck Center. Mario Bustamante is also featured; he left his Mexico City home as a teenager to find his father, followed his father into the lettuce fields, and then into a union that became a social center, a classroom, and a path to power.

The program on April 3rd will feature an online gallery of photos as well as opportunities for participants to peruse the website, add comments, and tell their own stories. The panel discussion, led by Luis Valdez, will feature participants in the movement who are the subjects of the photographs. Timed to be close to Cesar Chavez Day, the event offers an opportunity to revisit the farmworker movement with fresh perspectives and help inform a new generation about the significance and legacy of the farmworker movement in the 1970s.

The project was made possible with support from California Humanities, a non-profit partner of the National Endowment for the Humanities, and the Center for Community Advocacy.