Growing up, Scott Julian was motivated by the reach of his father’s real estate and property management businesses into the community, but he was inspired by his dad’s work ethic.

Carmel by the Sea, CA, February 02, 2021 - Growing up, Scott Julian was motivated by the reach of his father’s real estate and property management businesses into the community, but he was inspired by his dad’s work ethic. It was he who introduced Julian to the tenets of motivational speaker, the late Zig Ziglar, who said, “You can have everything in life you want, if you will just help enough other people get what they want.” 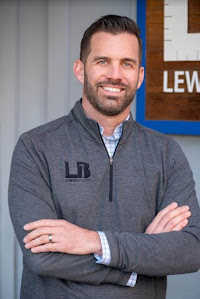 It is this principle that has guided Julian’s actions in life and in business, whether he was running his own landscaping company during high school, for which he was bestowed the local chamber’s “Young Business Person Entrepreneur Award”, or today, as he takes the helm as President of Lewis Builders residential design/build firm in Carmel.

“I've been fortunate to have several influential leaders invest in or inspire me,” said Julian, “which fuels my passion to create opportunities for others. In the past few years, we’ve hired college graduates and have grown them into managers. We’ve hired aspiring designers and helped develop them into award-winning designers. We’ve hired master builders who previously worked for themselves, and are now providing them with a team, proven processes, and a fulfilling career.”

Julian’s own career development, from serving as COO for the past four years, to adding President to his role in the firm, is an example of the mentoring mentality on which Lewis Builders CEO John Lewis built the company, and has served as the foundation on which they’ve developed their team.

Within a year after graduating from high school, Scott Julian had his contractor’s license and had established the first of many businesses he would develop during the next 25 years. In 2016, he was working as an “Aging-in-Place” consultant, offering home-modification recommendations to enable residents to live safely in their homes for as long as possible. Seeking a qualified builder who understood and practiced the concept, he discovered John Lewis, an Aging-in-Place specialist, certified through the National Association of Home Builders.

Lewis believes in “Change Your Space, Change Your Life.” He believes in possibility, in productivity, and in developing a democracy both within his business and in working with clients, enabling everyone to have a voice and a role in the process and the outcome.

“I’ve always believed in attracting and retaining team players by focusing first on their goals and what they need,” said Lewis. “A mistake business owners often make is spending time attracting ‘A players’ and then not leaning into their intelligence and expertise. I’ve worked hard to create what I think is a true democracy, a safe place where intelligent people with different views come to table to express their ideas through healthy conflict, and then extract the most viable solutions, ideas, creativity, and inspiration.”

In 2017, Lewis brought Julian and Kenny Boyd into partnership, starting with an invitation to join him in Florida, at a weeklong master course in business, with entrepreneur, business strategist and motivational speaker Tony Robbins. The trio went with two goals in mind: to get to know each other better, and to immerse themselves in the psychology and practices of “better business.”

“We came back, business partners,” said Julian, “with a three-year plan and the goals and the strategies to successfully implement it. That John and Kenny saw the potential in me and thought enough of me to invite me on this journey with them has been life changing.”

“John Lewis,” says Julian, “is a visionary and a leader. Kenny Boyd has the financial experience and acumen to put the guard rails around the entrepreneurial visions.”

“I’m honored to have earned their trust to be promoted to President,” said Julian. “I am the process and people person, creating systems for what is a really complicated industry. Particularly now.”

After four years of working with Lewis and Boyd to develop the Lewis Builders team, Julian is directing the daily business, enabling Lewis to focus on the future, watching for trends, and developing the highest level of building design.

“I have every confidence that Scott Julian is in the best possible position to lead us,” Lewis said. “From an operational standpoint, no one is more well-suited, more capable, more deserving to lead our democracy than Scott.”

Leading a Company During COVID

For Lewis Builders, the new decade dawned with a full docket of design and building projects, and the promise of a productive year, which didn’t plan for a pandemic. However, the company quickly put processes in place that, in many cases, enabled them to implement pandemic protocols and continue to provide services. When COVID shut down construction, they shifted to strategizing, so they were ready to roll once the order was lifted.

“In Monterey County,” said Julian, “it is very difficult to get construction and remodeling projects properly designed and permitted, even when there isn’t a pandemic. But, having a clearly defined process that moves the project forward, executed by a team of talented engineers, designers, and contractors committed to our clients, often has resulted in finishing in record time. Even now.”

In addition to working with a dynamic team as he deals with the day-to-day demands of business, Julian relies on the support of his biggest champions, his wife, Alicia Stirling-Julian, and their daughter, Alexa.

An unprecedented year, 2020 proved a trying time for all, filled with unforeseen challenges. Against all hope, 2021 seems to have begun as a continuation of that. “Yet, because of this,” said Julian, “I have learned so much about resiliency and determination, and how essential it is to work as a team, always guided by our core values. If we can do that, we’ve got this.”