Save the Date for The Escape Room Grand Opening Ribbon Cutting with the Monterey Peninsula Chamber of Commerce Tuesday, September 26th from 5:00 p.m. – 7:00 p.m. Details to Be Announced Soon. Open To the Public

Monterey, CA, August 15, 2017 — Imagine being closed in a room with a half a dozen other people and you're given just one hour to figure out — through clues, codes and suggestions scattered throughout the room — to solve a murder.

Change the scenario to a bank heist, a hostage situation, a kidnapping, a prison, pirate ship, a space station, and much more, and you have one of the hottest trends in interactive or immersive entertainment — Escape Rooms. They're based on escape-the-room video and online games, as if the classic board game “Clue” became a live-action game you play with others in real locations. 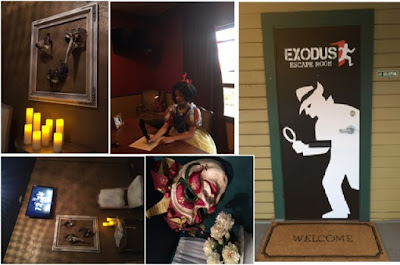 And now Monterey has its own version — Exodus Escape Room on Cannery Row — founded by entrepreneur Christina Riddoch of Monterey.

“My granddaughter Andrea and I would play these games online together,” says Riddoch, who opened Exodus Escape Room the first weekend in August. “We were walking around Union Station in Kansas City and we saw a live escape room. We did it and we had so much fun. I said, we need to do this in Monterey, so I started looking into it.”

“I was literally on a high from it for days,” she says. “You feel alive again, it was such an experience, it got us outside of ourselves.”

She talked the escape room operator in L.A. into franchising, found a suitable location above and behind The Whaling Station restaurant on Wave Street in Cannery Row, set up two escape rooms there and opened to capacity crowds — “It was nonstop until 11:30 at night that first night,” she says.

In Sherlock's Study, in the midst of a murder investigation, Sherlock Holmes has been kidnapped by the very murderer he was trying to catch. It's up to the players to piece together the evidence he has left behind in his study. Will you be clever enough to step into Sherlock’s shoes and solve the mystery?

In Masquerade Manor, wealthy and famous composer Ludovico Manin is the prime suspect in a recent, high-profile crime. That night, during his annual Masquerade Ball, is the best chance to look for evidence against him. Disguised as guests, players must infiltrate the ball, find proof of Manin’s guilt, and leave without being detected. Can you find the stolen object and escape in time?

The rooms are monitored by video cameras with audio. If players fail to solve the mystery and escape, they can return to take another crack at it for half-price. Riddoch says she hopes to open a third room with a bank heist theme.

“Ours is family-friendly since we're on Cannery Row,” says Riddoch, referring to some of the more gruesome or frightening escape rooms out there. “I think Cannery Row needs this.”

Originating in Japan as Real Escape Game (REG) in 2007, Seattle-based Puzzle Break became the first American-based escape room company in 2013. They are patterned after video or online games such as Zelda, Myst and Crimson Room. There are estimated to be more than 3,000 escape room venues worldwide. There's even a website directory of escape rooms (escaperoomdirectory.com) and people who are fans of the games are called Escape Room Enthusiasts.

"There is a growing consumer demand for social play experiences that are live and unique and can't be repeated," Sam Roberts, assistant director of the Interactive Media and Games division at the USC School of Cinematic Arts, told the Los Angeles Times. Roberts says that immersive entertainment will be the next frontier of gaming — "the future of play spaces," he says.

“It's just so much fun,” says Riddoch. “It's great for team-building, it's fun playing it together with friends. It's such a great experience.”