Paul Seftel's journey as an artist began when he was only 4, thrown out of his first school for the crime of drawing a “lewd picture” of a dog standing up wearing a suit, taking a piss.

Salinas, CA, August 31, 2017 - Seftel has always pursued his own path, finding further study in Denver and learning masterful techniques in creating and applying paint and plaster. PS Project Space in New York, which he opened in 2011, served as a studio, gallery and collaborative project space for a few years.

Seftel has done several artist's residencies around the world, living and working from a few months at a time to a few years in Taos, New Mexico, Denver and Vail, Colorado, Barcelona, Costa Rica, Hawaii and now in Pacific Grove at the American Tin Cannery. 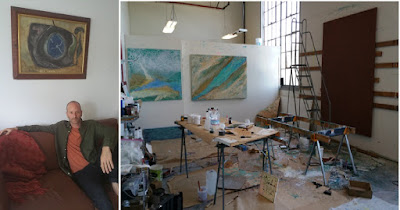 “My work is very much about the physical elements and the textural emotional elements of our lives. The ephemeral motions of the crashing ocean waves to the way fog moves across the water somehow represent our timeless and changing human state to me,” says Seftel while sitting in his studio/workshop at the American Tin Cannery, a former commercial outlet center and one of the few surviving original sardine canneries at the edge of Cannery Row.

When talking to the London-born and raised artist, these elements, and how they organically become part of his work, are never far from any conversation about what he does and who he is.

Yet Seftel isn't only inspired by nature, he's compelled by it. He is aware that he is also a part of this same nature, and as such sees himself as a “co-creator” and “channel” in his artful process. This process doesn't involve just conventional paints and brushes, but investigates the nature of surface, deconstructing traditional fresco formulas and ancient techniques, whilst integrating modern materials and chemistry. The mixtures and solutions are applied with the aid of gravity and his own active painting techniques.

One work could be composed of limestone, iron oxide, copper patina, pigments and polymer on canvas, while another could be cast gypsum, cast mineral stone an crystal. He adds layers and layers of colors, hues and textures that transform and react to each other to create yet another layer.

The bio on his website isn't a recitation of what schools he attended or where his works are displayed, but about his journey as an artist.

“What is discovered is a ‘dynamic process,’ where awareness of internal experience and a connection with the creative forces of the universe is found,” he writes. “Confronting the many conundrums of time and space, the beauty of what we have and what has been lost is texturally explored, revealing patterns and depths in the endless layers of formless form behind the nature of the seen and unseen world.”

For Seftel it's all about the process and he never really knows where it will take him, though for now, the Monterey Peninsula has captured him. Living the dream, the quality of the light, and the energy of earth, ocean and sky meeting on the central coast captures him in both reality and imagination.