Pacific Grove, CA, January 07, 2015 - Save the date for a not-to-be-missed concert with the fabulous internationally renowned Celtic performers: Rebecca Lomnicky & David Brewer & Special Guests: An Evening of Scottish Music & Dance. This very special event will be held on Friday, January 9th at 7:30 p.m. at the First United Methodist Church of Pacific Grove, 915 Sunset, in Pacific Grove, CA 93950. Tickets are now available at http://www.brownpapertickets.com/event/1054041 and are $20 (general) $15 (seniors over age 65 military and students with ID). For more information, call (831) 633-4444 or email brickman@brickmanmarketing.com. 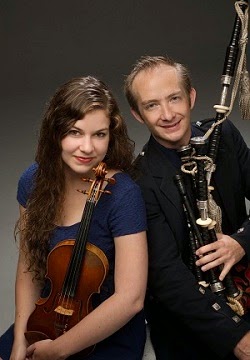 About Rebecca Lomnicky and David Brewer:
Rebecca Lomnicky and David Brewer are a high energy pure-drop Scottish music duo, with world class fiddling talent in combination with bagpipes, guitar, bodhran, and whistle. International Scottish Fiddle Champion, Rebecca Lomnicky, and David Brewer of the popular Celtic band Molly's Revenge, have each spent copious amounts of time delving into the traditions of their respective instruments, living and studying in both Edinburgh and the Scottish Highlands. Together they perform captivating Scottish music which bridges the gap between the fiddle and bagpipe music of Scotland, two worlds united, into a heartfelt and rousing musical experience. Between their entertaining and informative stage banter, varied instrument combinations, and vast repertoire of tunes and songs, including everything from soaring slow airs to intricately arranged dance tunes, these charismatic performers will leave you on your feet with your hands together.

The duo will be joined by several special guest highland dancers & singers, including Peter "the Admiral" Haworth, former vocalist of Molly's Revenge, from Blackburn, in the north of England.

About Rebecca Lomnicky:
Rebecca Lomnicky began playing classical violin and piano at age five, discovered Scottish fiddle music only a few years later, and in 2005 won the Junior Division of the U.S. National Scottish Fiddle Competition. Following that victory, she recorded her first CD, The Call, praised by Dirty Linen magazine as "technically masterful, and wonderfully melodic." In 2009, Rebecca won the 20th Annual Glenfiddich International Scottish Fiddle Championship held at Blair Castle, Blair Atholl, Scotland. The invitation only championship - seen as the Grammys of the fiddling world- is widely regarded as the most prestigious in Scottish fiddle. She has performed in Scotland, Ireland, Italy, China, and across the US, has been featured on the BBC radio show, Take the Floor, and in 2009, recorded her second CD, Inspired, with David Brewer. In 2014, Rebecca graduated summa cum laude from Cornell University with a double major in Music and Sociocultural Anthropology. She was also awarded the 2013-2014 Ellen Gussman Adelson Prize for outstanding instrumental music performance. For more about Rebecca, please visit: www.rebeccalomnicky.com

About David Brewer:
David Brewer is a multi-instrumentalist who has toured with the Scottish super-group The Old Blind Dogs, and with Molly's Revenge across the US, the UK, Canada, China, and Australia. He has been a special guest of the six-time Grammy winning group The Chieftains, and was a key musician for the soundtrack of the PBS documentary, "Andrew Jackson, Good, Evil, and the Presidency". David, who is known for being animated and engaging on stage, compliments Rebecca's award winning fiddling with guitar, Irish penny-whistle, and bodhran frame-drum, but primarily the Scottish bagpipes, on which he is unarguably one of the most energetic and charismatic performers of the instrument in the world today. For more about David, please visit: www.davidbrewermusic.com