Scottsdale, AZ, February 10, 2015 – Former NBA basketball player Joe Courtney announced the upcoming release of the hard cover version of “Life Above and Beyond the Rim”. Courtney has also launched a 10 week training program to accompany the best-selling book aimed at empowering people through his 10 principles to unlock and break through barriers to achieve success in business and in life. 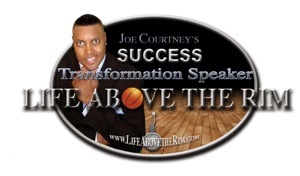 The NEW Hardcover book will be released on February 20, 2015 via Amazon and other retail outlets. Pre-release orders are available at www.joecourtneysbook.com. Those who order the hard cover edition prior to the 20th will receive a personally signed action shot in the book and will also receive a FREE 10 Week Training on the book (Valued at $397).

Courtney is no stranger to adversity and breaking through barriers in order to achieve success. Joe who didn’t pick up a basketball until his 10th grade year in high school has broken through many barriers including making it to the NBA without being drafted and owning and operating a successful design build company. His work was featured in Architectural Digest, and many other publications. Now Joe is spreading the message of empowerment through his new book and success program “Life Above and Beyond the Rim”.

The book has been endorsed by some of the top leaders on the topic of success. Tim Grover, who is the Best-selling Author of “Relentless” and personal performance expert for Michael Jordan Charles Barkley, Kobe Bryant, and Dwayne wade, had this to say about Joe’s book; "Some people just talk about breaking through barriers; Joe Courtney has actually done it. His book can do the same for you."

Former Suns Owner and Head of USA Basketball Jerry Colangelo chimed in with this; " His book should serve as a tremendous inspiration to people of all ages, athletes and non-athletes regarding commitment, compassion and empowerment."

Learn more about Joe and PRE-ORDER “Life Above and Beyond the Rim” at www.joecourtneysbook.com