Hollywood, CA, September 04, 2015 - Robert Miller’s Project Grand Slam is gearing up for a busy fall with the September 18th release of their next single featuring their unique take on Jimi Hendrix’s Fire. The song showcases Guest Vocalist Kat Robichaud from NBC’s The Voice, who lends her rock n’ roll and glam roots to the song and the related video. This cover of Fire is unlike any other. It’s a sexy, smoldering version that captures the full emotion of the Hendrix classic. 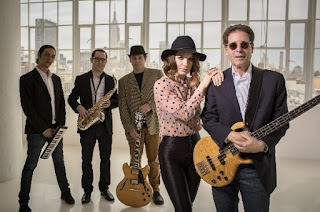 On October 16th PGS will release their new full length album that includes the singles New York City Groove and Fire as well as two tracks recorded “live” at the world famous Blue Note Jazz Club in New York City. All of the songs on the album (except for Fire) were composed by Robert and reflect the band’s distinctive trademark sound and feel.

The band’s most recent single, released on July 10th, is Robert’s catchy, snazzy New York City Groove, also featuring Kat Robichaud on vocals. The song is “a love letter to my NYC home,” says Robert, leader/bassist/composer for PGS. In the month since its release, the Groove video has been viewed over 102,000 times on YouTube, and the instrumental version of the song is moving up the charts on jazz radio.

The Groove video (http://smarturl.it/NYCGroove) contains Kat and others doing their own “Groove move”, which in turn has spawned a “Groove Movement” of people dancing their own “move” to the song. PGS is inviting everyone to join the “Groove Movement” by creating their own individual “Groove Move” video and uploading the video to any of their social media accounts (Facebook, Twitter, Instagram, etc.) using the hashtag #GrooveMovement.

On September 9th PGS will be performing at The Cutting Room in NYC. This comes on the heels of their highly regarded performance on August 5th at The Iridium in NYC.

The band has decided to donate 10% of the sales from New York City Groove to three New York City based art and culture non-profit organizations that benefit underprivileged and inner-city children. “I thought it was appropriate for us to align the success of New York City Groove with our support for several NYC-based arts non-profits that provide great programs and services for children in need,” said Robert, adding: “It’s our way of ‘playing it forward’.” http://www.projectgrandslam.com