WHO: Margo Rey In Concert

WHAT: Seven-time Billboard charting singer-songwriter Margo Rey will grace the stage of the London Leicester Square Theatre on August 30, 2016.

Hollywood, CA, August 23, 2016 - Margo Rey is known for the creation of her own style of ‘Organica’ music that can be explained as an unorthodox hybrid of pop music that is rooted in Jazz with deep ethno-rhythmic grooves, textural guitars, keys and lush vocals. Margo continues to deliver her array of vibrant and sultry singing talents that easily compliment her gentle and uplifting melodies. Margo is known to combine a variety of organic sounds and pour every bit of emotion into each song she creates. Her alternative pop singles have captured a worldwide audience with her enduring, socially conscious lyrics and her unforgettable, groove oriented musical arrangements. 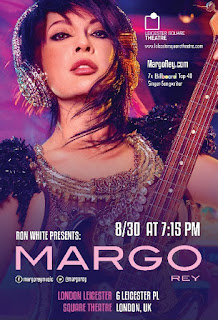 Margo’s musical efforts have not gone unnoticed. Margo has earned nine Top 20 charted hits on Billboard and others including, “Let The Rain,” “Between Us,” “Habit,” “Tempted” and more! AXS has touted, “Rey [is] one of the most in demand and inspiring singer/songwriters of our day.” Songwriter’s monthly praised, “‘Margo Rey is elegance personified. Her exquisite look, impeccable poise, effortless grace and sublime talent.”

In more recent years, Margo became the National Ambassador for non-profit organization Brides Against Breast Cancer. Margo has battled breast cancer herself and while striving through her struggles she continued to pursue her music career. She also has received much recognition after performing at the Beverly Wilshire Hotel for a special one-night event benefitting The Noreen Fraser Foundation, a non-profit organization that focuses on raising funds for women’s cancer research.

Margo Rey’s philanthropic efforts and her distinctive style of ‘Organica’ have generated her prosperous fan base across the world. Margo Rey is a must-see performer and if you cannot catch her in California she will be continuing her residency as an opening act of her husband, and well-known comedian Ron White at the Parlor Lounge in Las Vegas.