New York, NY, September 20, 2016 – Robert Miller’s Project Grand Slam, the jazz rock fusion band led by the acclaimed bassist/composer, is excited to announce the release of their latest single and title track from their new album The Queen’s Carnival. An upbeat, fun tune, Miller describes the track as “a fiesta – a Latin celebration”. The track’s accompanying music video, which will be released on Monday, September 19th, captures the sights of a Carnival celebration, a perfect match for the scenes evoked by the song. “The Queen’s Carnival” is a song that will find its way into your soul and inspire you to get up, dance, and enjoy life. 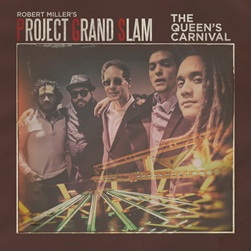 You can view the music video for “The Queen’s Carnival” via this private link.

Project Grand Slam’s 4th and latest album, The Queen’s Carnival, is available now in digital form via CEN/RED Distribution, a division of Sony Music. This exciting and fresh take on jazz rock fusion features eleven tracks, including nine original songs by Robert and both vocal and instrumental versions of Robert’s reimagined version of the Kinks’ classic, “You Really Got Me.” Dave Davies, guitarist and co-founder of The Kinks, had this to say about PGS’s version of “You Really Got Me” – “Very unique version and I am liking it!”. The new album draws from a variety of influences across genres as diverse as Celtic folk and afro-Cuban rhythms while highlighting Miller’s unique approach to blending jazz and rock into an entirely new sound.

This album follows the successful 2015 release of their third album, “Made in New York”, which featured the hit songs “New York City Groove” and “Fire” (Robert’s highly acclaimed reimagined cover of the Jimi Hendrix classic).

About Project Grand Slam:
Robert originally formed the band in 2007. Project Grand Slamʼs first two celebrated CDs, Play (2008) and Spring Dance (2012), had three top radio singles – “The Captain Of Her Heart” (feat. Judie Tzuke on vocals) from Play, and “Catch You Later” and “Spring Dance” from Spring Dance. The band also had a featured role in the hit NBC-TV series Lipstick Jungle starring Brooke Shields and Kim Raver, with five of the bandʼs tunes featured in the soundtrack and Robert having a speaking part.

In November 2015 the band opened for Scott Weiland (formerly of Stone Temple Pilots) at NYC’s Gramercy Theater. In May 2016 the band opened for 4-time Grammy Award nominee Boney James at the Bergen Performing Arts Center in NJ. In July the band was the featured performer at the Kirby Center For The Performing Arts in PA. In August PGS performed at the Tin Angel in Philadelphia and at Garcia’s at The Capitol Theater in Port Chester, NY (following YES). Also in August PGS hosted a CD Release Party at NYC’s Rockwood Music Hall. In October the band will again open for Boney James at the Ridgefield Playhouse and in December PGS will be the featured performer at the Highland Lakes Concert Series in NJ. The band continues to play at various clubs in NYC including a monthly residency at The Groove.


For more information, to request an interview, or for a review copy of “The Queen’s Carnival” single or full album contact: