Los Angeles, CA, February 22, 2017 - Americana songstress Amilia K Spicer will release her third album, Wow and Flutter on April 28, 2017. Spicer also exclusively premiered the music video for “Fill Me Up” from Wow and Flutter on February 14 via TheBluegrassSituation.com, in advance of the Folk Alliance festival. The video was filmed in the very woods she explored as a child in rural Pennsylvania and features scenes of Spicer re-discovering those woods while playing the song. The video is now available via Spicer’s YouTube channel. Spicer performed songs from the new release during her Official Showcase at the prestigious Folk Alliance festival, which takes place in Kansas City, MO on February 15 -18, 2017. 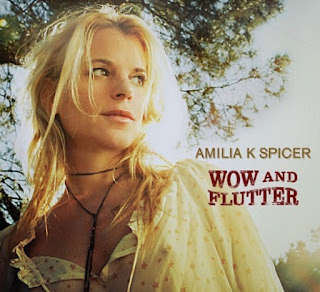 Wow and Flutter is Spicer’s most compelling work to date. The songs map her musical DNA in landscapes of languid farmlands, gritty alleys and red dirt noir. Her lyrics reflect the various places she calls home; Pennsylvania where she was raised, and Los Angeles and Austin where she currently splits her time. She visits her father’s hometown of Harlan Kentucky on the track “Harlan” as well.

The album kicks off with the twang and yearning of the first track “Fill Me Up,” a plea to the universe to fulfill her broken soul. The album’s journey continues with sensual and heartfelt songs like “Harlan,” and “This Town,” which recounts a scene known to many, when one finally realizes that no matter how far you travel, you never truly leave your hometown. Spicer confesses, “I know my home is in this town, like I know just how to breathe.”

About Amilia K Spicer:
When Spicer answered music’s call, she was first discovered at a Los Angeles club. That led to a rare main stage Kerrville Folk Festival debut, three Kennedy Center performances, song placements in several high-profile TV productions (Party of Five, Dawson’s Creek), and more. Spicer’s first two releases, Like an Engine and Seamless were released to critical acclaim, with New Texas Magazine calling Spicer “A formidable talent.” Spicer’s music has also earned comparisons to that of Lucinda Williams, Emmylou Harris, and Lanois. During the writing process for Wow and Flutter, Spicer took time to work on several other projects. Among these, she has been lauded for her contributions to Cinnamon Girl: Women Artists Cover Neil Young and A Case for Case: A Peter Case Tribute with John Prine. She also appeared on the 2009 Safety Harbor Kids Holiday Collection, alongside Jackson Browne, Sheila E, and Paul Barrere. Spicer has enjoyed other collaborations as well, most notably appearing on albums by John Gorka and the final Rounder release from the late Bill Morrissey.

For more information about Amilia K Spicer, her Folk Alliance festival appearances, or for review copies of “Fill Me Up” and Wow and Flutter please contact: Chip Schutzman, Miles High Productions, chip@mileshighproductions.com, 323-806-0400