Snidely may be a silly snake who tells side-slapping stories for children in his new book, but he's also a life-saver.

Monterey, CA, September 01, 2017 — Snidely may be a silly snake who tells side-slapping stories for children in his new book, but he's also a life-saver.

Not only that, but Snidely will also help fellow veterans of his co-creator, a disabled U.S. Army veteran who served during the Vietnam War era, with $1 of the proceeds from each book sold going to the PTSD Foundation of America.

The foundation is a non-profit organization dedicated to mentoring our combat veterans and their families with post-traumatic stress, feeling it is our duty as Americans to help these mighty warriors and their families adjust and find their new normal. 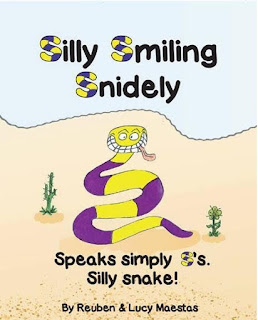 “Silly Smiling Snidely” was co-written by Reuben Maestas and his wife of 34 years Lucy and illustrated by Reuben, a veteran who suffers from extreme PTSD, which riddles his body with pain from his injuries.

Fortunately, Reuben found an outlet for his disability by writing. When the PTSD gets too much for Reuben to handle and he feels like he wants to give up, he writes down the crazy characters in his head. He says he tries to lose himself in the character and thinks about how it will help children of all ages to be happy even if it’s just while they are reading about his silly snake.

Snidely and the book has proven to be a life saver in Reuben’s case and has helped his PTSD more than any medication has helped. He has been sketching and writing about Snidely since 1989. He would start on it for a few days and then get discouraged and put it away, a few months would go by and he would pick it up again for a few days. This went on for years until finally Reuben and Lucy both decided it was too cute to keep it to themselves. They finished the book in 2015 and published it in 2016.

There's also a little twist to “Silly Smiling Snidely,” which recounts Snidely's travels and adventures as he “slips, slides, and slithers sideways slowly south.” He speaks only using words that begin with the letter “s.”

Or as Reuben and Lucy would say: “Snidely sure says some side-slapping stories. Silly, silly snake.”

And since Snidely is such an entertaining lifesaver for someone with PTSD, $1 from every book sold will go to the PTSD Foundation of America, a non-profit organization dedicated to mentoring to the country's combat veterans and their families suffering from post-traumatic stress.

“It was so much fun working on this book and we are very proud of the outcome,” says Lucy. “So many people and especially teachers say what a wonderful, educational book for all ages to enjoy; it’s so much fun to read!”

Reuben and Lucy are already working on not one, but two sequels to Snidely's stories.

The book is available on Amazon and at Barnes and Noble, as well as a handful of brick-and-mortar bookstores:

About the PTSD Foundation of America
PTSD Foundation of America is a non-profit organization dedicated to mentoring to our combat veterans and their families with post-traumatic stress. Many warriors are coming home with visible wounds; countless others are coming home with scars we cannot see, wounded souls from witnessing the horrors of war over and over again — PTSD. We feel it is our duty as Americans to help these mighty warriors and their families adjust and find their new normal.

PTSD Foundation’s Mission
1. Bring healing to our military community (Active duty, Reserves and National Guard, veterans, and their families) through pastoral counseling, and peer mentoring, both on an individual basis, and in group settings.
2. Raise awareness of the increasing needs of the military community through public events, media outlets, social media, service organizations, and churches.
3. Networking government agencies, service organizations, churches and private sector businesses into a united “Corps of Compassion”, to bring their combined resources together to meet the needs of the military community on a personal and individual/family level.