Mendoza’s residency and art project “Process in Progress,” begins Saturday, Dec. 23, when the public is invited from 10 a.m. to 2 p.m. to stop by and interact with the artist. Other sessions are scheduled for Jan. 4, 2018; Jan. 5 at the First Friday reception; Jan. 8; and Jan. 15, which will be a screen-printing workshop where the public is invited to participate and learn basic screen-printing techniques on both paper and fabric. The residency closes on February 4, 2018. 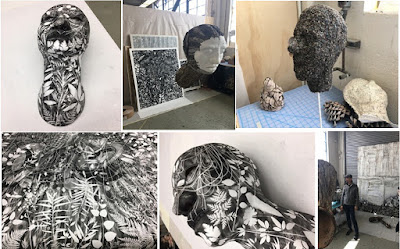 “Process in Progress” includes drawings, sculptures and installations that invites the public to experience a glimpse into the artist’s studio practice, a behind-the-scenes look into the artist’s process of making art.

According to Mendoza, the main impetus of the project is to present a body of work in its various stages of completion, allowing the public to consider the following questions:
1. When is artwork considered complete and ready to exhibit?
2. What are the influences that dictate, inspire or inform a body of work?
3. What role does the alchemy of materials play when creating art?
4. How is the process of experimentation a major contributing factor for generating new art techniques and ideas?

In addition to artwork, the project will include supporting materials such as sketches, books, magazines, photos, and sound to engage the audience. He hopes to have at least 35 works on display, including about 10 at various stages of completion. Mendoza will be on site one day a week during regular museum hours during the one-month period of the project.

“By simultaneously using the museum as an exhibition space and an artist-in-residence studio, the practice of artmaking becomes more accessible to the public and consequently demystifies how art is created,” says Mendoza. “The project also seeks to add to the current dialogue of how contemporary museum spaces are being used by artists and the public.”

Mendoza, who was born in Uruapan, Michoacan, México, but grew up in King City, uses recycled clay, concrete, and rust in combination with found objects as a way of creating personal icons in his work. Mendoza’s work explores a wide range of themes, including the relationship between history, race and nature.

“My work is a social statement, a commentary on society. Visions from daily life are points of departure for my work,” Mendoza says. “The concepts I have used in my art are chosen as they are introduced via mass communication media or through personal experiences. I incorporate both expressive and realistically sculpted objects with significant gestures to portray metaphor.”

After graduating from high school with honors, he was awarded a scholarship to attend California Polytechnic University in San Luis Obispo, California, where he studied graphic design.

After completing his bachelor’s degree, Mendoza was invited to several artist-in-residence programs and exhibitions in Europe, including Kust Futur in Switzerland 2000, The Bossard Project in Berlin 2001, Casa Santos in Barcelona 2002, and The Putney Arts Center in London 2003.

Mendoza’s awards include the Eureka Fellowship 2004 in California, Kunst Now 2005 in Berlin, and Eco-Conciente 2007 in Mexico City. In 2009, he received his master’s degree in fine art from Yale University. Most recently he was awarded an artist’s residency at the prestigious Djerassi Resident Artists Program in Woodside, California.

He currently lives in Monterey and is an Assistant Professor in the Visual and Public Art Department at California State University Monterey Bay. Mendoza teaches studio courses in sculpture, painting, and screen printing.

The museum was established in 1959, to uphold the artistic legacy of the region by collecting, preserving and presenting the art of California and the Central Coast. Originally a chapter of the American Federation of the Arts, MMA remains the only nationally accredited museum between San Jose and Santa Barbara.