Los Angeles, CA, March 19, 2018 - On March 23, 2018, dance pop sensation Ashley Jis set to release her debut EP, Satisfied. On the EP, Ashley combinesher hit singles with unheard releases that she’s sure her fans will love. Ashley’s vocals swirl amidst innovative hooks and slick dance beats. Satisfied is fresh, modern, addictive, and meant to be devoured in one sitting – but it willstick in your head for the rest of the day. 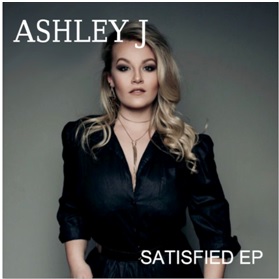 Ashley’s talents for songwriting shine on Satisfied. She’s come a long way since the days of writing lyrics on her parents’ bathroom walls. In those days, the words would be painted over. Now, they linger in your mind. They’re thoughtful, resonant, and get stuck in your head just as much as the earworm hooks. From the triumphant “Unbreakable,” in which Ashley finds the courage to pursue her inner strength following heartbreak, to the soaring love song,“Satisfied” – the EP covers a vast array of human emotions. It’s mostly explosive, but when Ashley wants you to feel something quietly, just for a moment, she draws you in – then drops the beat.

Satisfied is almost constant energy, filled with dance anthems, and its premiere track in particular, “Trapped,” enjoyed four consecutive weeks at #1 on the European Independent Music Charts. Previous releases made it on the Billboard Top 10 Dance Charts, and given the sheer triumph that is Satisfied, a similar destiny awaits this new music from Ashley J, the Orlando native who started her own production company, then steadily conquered the world.

The five-track Satisfied starts with the already massively successful “Trapped,” and also includes “Unbreakable,” “Satisfied,” “Like You Used To,” and “When I Come Home To You.” Though the songs may differ in the level of party they bring (particularly the bookend tracks), throughout the entire EP, Ashley J’s powerhouse voice dazzles. She is a true talent, from the pen to the page, to her voice in the studio.
About Ashley J

Three-time Billboard charting artist Ashley J has a fascinatingly diverse background: artistically and musically. She packs a wallop of a voice that fuses an infectious blend of vocal dexterity, moods and range. Ashley tempers her vocal prowess with poignant lyrics and a kindred soul as an emerging songwriter/singer. And it’s all aptly and full exposed on her new pop EP, Satisfied, released through her own production company imprint, Bombshell Music, Inc. The EP features five tracks self-penned by the emergent Ashley J, incollaboration with many established producers, including Lucas & Adrian Rezza, Jamie Sellers, and Warwick Matthews.

On the title track “Satisfied,” Ashley worked with the multi-platinum, Grammy & Emmy-winning Narada Michael Walde, who called Ashley “a real American sweetheart with a big voice and lots of energy! She has soul and her beautiful smile lights up the room.”

Multiple singles off the EP have topped the European Independent Music Charts, particularly “Trapped,” which nabbed #1 for four weeks in a row. Her remixed singles of “One and One,” “Cali”and “Dare Ya” each made it to Billboard’s Top 10 Dance Charts in 2014 - 2016. The jubilant pop queen enjoys broad global appeal, with many drawn to her stellar, buoyant music. Step by step, Ashley continues her journey to become a revered figure in the world of pop music.