Salinas-based professional dog trainer and animal behavior counselor Barbara De Groodt has been named to the International Association of Canine Professionals (IACP) International Hall of Fame. And she never saw it coming.

“I had absolutely no idea it was coming, none whatsoever,” she says, when she was presented the award at the IACP’s annual conference in St. Petersburg, Florida. “My staff sure knows how to keep a secret. When (at the conference) they started to talk about people (who were nominated) and it narrowed down to me, I said to myself, ‘oh my god, this isn’t good.’ I cried.” 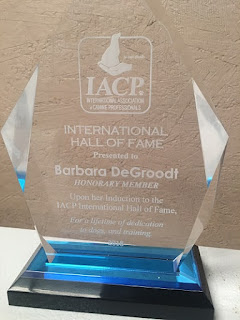 Luckily for De Groodt, she didn’t have to give a speech, but accepted the award onstage and later took some good-natured ribbing from a friend for the rest of the night of “Crybaby! Crybaby!”

“It’s quite a privilege,” she says of the award, which is awarded to “heroes … within the dog industry who have made an impact on the world of dogs and provided the dog world with a legacy that will always be remembered.” “It’s one of those things, you go through life, work hard and hope to one day be recognized by your peers. This is why I do what I do. When John Rogerson, one of my mentors, say these things about you, that means a lot.”

Here’s what Rogerson, one of the world’s leading dog trainer and behaviorists and founder and lecturer of United Kingdom’s Northern Centre for Canine Behavior, wrote in his letter of nomination to the Hall of Fame:

“There are few characters in the dog world that not only inspire others but also can walk the walk where many sadly are just able to talk the talk,” he wrote. “I have known Barbara for more than 20 years and have seen first hand not only her ability to work with her own dogs but also her ability to work with owners and other canine professionals to improve their understanding of their canine companions. Barbara unselfishly gives much of her free time to helping and supporting many worthwhile canine projects and also, despite her huge wealth of knowledge, still travels extensively at home and abroad to further her own education. There is no other trainer from the U.S.A. that I have ever endorsed, Barbara is one in a million and deserves international recognition for her amazing life and lifetime achievements.”

“I was teary-eyed when I read those letters, especially the ones from my mentors,” she said. “My peers were the ones who nominated me, that made so much of an impact on me. You know somebody is watching.”

De Groodt founded From the Heart training and dog behavior counseling in the late ’80s, but she’s been working with dogs since she was a pre-teen.

“I’ve been training dogs since I was 8 or 9 years,” she says. “My dad trained German short-haired pointers.”

From the Heart’s training philosophy includes positive reinforcement, training to mold a dog's behavior into a desirable asset, and trust: “Trust is the key word in the methods used at From The Heart, however, trust must be earned by and from your dog.”

“Dogs are, by nature, social animals and look to us to provide leadership that is fair and non-judgmental. My commitment to you is to provide you with tools needed to change undesirable behavior into desirable behavior. A dog's friendship can be a wonderful one if you both have similar goals.”

De Groodt says that her training methods are rooted in tried and true methods, but that it’s a “constant growth.”

“I tell my students don’t ever think you know everything,” she says. “You should always be able to adjust. It’s a constant evolution.”

From the Heart Dog Training and