Los Angeles, CA, November 04, 2018 - Singer-songwriter Brooke Josephson is on the rise with her charismatic lyricism and infectious melodies. After the release of her pop-rock EP, “Sexy N Domesticated”, Brooke teamed up with house producer Rocky Gto create the remix of her “Mr. Fix It” single. The electro house remix will be available on all digital stores and online streaming platforms on November 16, 2018. To excite fans for the new release, Brooke will be dropping a music video to accompany the single on November 8th. 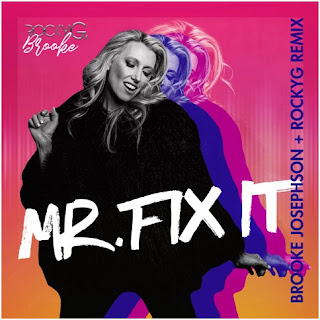 November marks the one-year anniversary for the release of the original track “Mr. Fix It” (2017). The song taunts female domestication and encourages women to finda man that caters tothe woman’s needs.In the remix, Rocky G opens with a progressive build that’sfilled with dreamy vocals and echoic synths. The hook then slams into hard-hitting drums and awakening sirens for a big-room styled drop.

In the music video, Josephson is dressed in a white furry coat and wears a pair of vibrant kaleidoscope glasses. She stands in front of a mesmerizing LED background that fades between a shimmering skyline. You see Brooke’s 9-year-old daughter, Shira,bust out her moves and even drop to the floor for some breakdancing.Her LED kicks add a new visual component to the scene. A live video of one of Rocky G’s DJ setsintermingles throughout the entire piece.

Electronic producer, Rocky G began her career in Portugal in 2008. In 2010 she was an ambassador and resident DJ on international tours for brands such as Red Bull, Ministry of Sound, and others. Rocky G saw success from her 2017 remix to Camila Cabello’s “Havana”, which racked over 1.5 million streams. Currently based in Amsterdam, Rocky G continues to create unforgettable and energetic tracks.

About Brooke Josephson:
From her expressive music, captivating videos, to her heaping media support,
Brooke proves she is a force to be reckoned with. Born and raised in small-town Warsaw, Indiana, Brooke earned a scholarship to pursue Vocal Performance at a Liberal Arts College in the area. During her time there, she performed Handel’s Messiah at Carnegie Hall in New York City and toured with the all girls group Agape for three years. Soon after, she became a principal performer at The Round Barn Theatre. This opened the door for Brooke to move to New York City where she worked as a singer and actress. Josephson landed roles on All My Children (ABC), Bones (FOX),Disney’s Enchanted, and others. After settling down with her husband Barry Josephson (TV/Film Producer) and earning her Masters certificate in songwriting from Berklee School of Music, Brooke self-released her debut EP Live and Let Live in 2013.

Brooke’s charisma on the TV screen not only follows her in her music videos, but also her live performances. Already, the LA based artist has played at some of Southern California’s notable venues such as; House of Blues (Anaheim), The Mint, Peppermint Club, to name a few. Josephson is definitely an artist that will take full grip of her audience and showcase a stirring performance.