Want to try a HIIT, CYCLE, YOGA or Zumba Class? A minimum donation of $25 allows you entrance to our Exercise Extravaganza. You can participate in any of our High Intensity, Interval Training (HIIT), cycle, yoga, and Zumba classes during this 5 hour event. FREE CHILD CARE is available from 9:00AM - 12:00pm 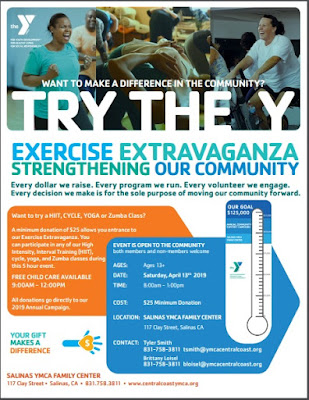 All donations go directly to our 2019 Annual Campaign. The fundraising case this year is simple and basic. Children need healthy, productive activities and safe places to go and families who are struggling through difficult times need support. Without the Y after school programs, many children in the central coast would have nowhere to go for homework help, mentoring, physical activity and other children to interact with to build strong character. We are committed to these children and with donors, volunteers & members support and fundraising, community events like these, we can continue to be there for them after school and throughout the summer with camps, sports programs and aquatic programs.

More details are available at the front desk and on-line at www.centralcoastymca.org. Contact Tyler Smith or Brittany Loisel at 831-758-3811 for more information.