Monterey Symphony Balcony Sessions Continue; New Board President of The Symphony is Named

Carmel, CA, September 18, 2020 – The Monterey Symphony continues its Balcony Sessions on Friday, September 18th with a duo featuring Genie Wie, violin and Adelle Akiko-Kearns, cello. The two women, both members of the Symphony, have put together a delightful 30-minute program which can be streamed online. Sponsors and donors are invited to sit in in the outside tasting room at Manzoni Vineyards through a pre-arrangement with the Symphony. The music can also be heard from both the Scheid and Silvestri Tasting rooms, also located in the 7th and San Carlos quadrangle. 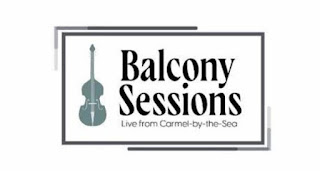 Hailed by critics as an "impressive" cellist exhibiting "beautifully sensuous cello playing," Adelle-Akiko Kearns currently serves as the Assistant Principal cellist of the Monterey Symphony. The recipient of the prestigious Artists International Award, Adelle made her New York recital debut at Carnegie's Weill Hall in November of 2008. Since then she has appeared on the the world's most important stages including Carnegie Hall, Lincoln Center, the Kennedy Center, Suntory Hall, Davies Symphony Hall, and many others.

In 2006 she gave the Japanese premiere of the Korngold Cello Concerto with the Tokyo Philharmonic, and was immediately engaged to return the following season to perform the Dvorak Concerto. Other previous solo appearances include concerto collaborations with the Santa Rosa Symphony, Cambrian Symphony, Auburn Symphony, Juilliard Conductors' Orchestra, the West Valley Symphony (Arizona), the San Francisco Conservatory of Music Orchestra, the Contra Costa Chamber Orchestra, and the Pacific Chamber Symphony.

As a chamber musician Ms. Kearns has performed at the world's leading music festivals including the Saito Kinen, Aspen, Tanglewood, Yellow Barn and Spoleto Festivals. She has collaborated with members of the legendary Juilliard String Quartet as well as renowned musicians Zuill Bailey, Jorja Fleezanis, Axel Strauss, Ian Swensen, Paul Hersh, Jodi Levitz, Daisuke Suzuki, and the Da Capo Chamber Players. In 2003 she was the only cellist from the San Francisco Conservatory of Music chosen to play for the late Mstislav Rostropovich, and in addition she has undertaken masterclasses with some of the most revered cellists such as Bernard Greenhouse, Raphael Wallfisch, Paul Katz, David Finckel, Norman Fischer and Mark Kosower.

Before returning to the Bay Area in 2011, Adelle served as the Assistant Principal Cello of the Louisiana Philharmonic and as a member of the Tokyo Symphony Orchestra. In addition to her position with the Monterey Symphony, she also performs as Principal Cellist with the Santa Rosa and Merced Symphonies, Assistant Principal Cellist of Symphony Silicon Valley and the Music in the Mountains Festival, as a member of the Marin Symphony and as a substitute cellist with the San Francisco Symphony. Ms. Kearns holds degrees from the San Francisco Conservatory of Music and the Juilliard School. Her principal teachers include Bonnie Hampton, Joel Krosnick, Sadao Harada, and Irene Sharp. A native of San Francisco, Adelle currently resides in San Jose, where she maintains an active teaching studio.

A native of Chicago, Eugenia Wie made her radio debut on Chicago Public Radio at the age of nine. During her formative years, she was a recipient of a Nicolas Amati violin on generous loan from the Mary B. Galvin Foundation and Stradivarius Society. She has performed in solo and chamber music across North and South America, Asia and Europe and appeared at world renowned music festivals including Round Top Music Festival, where she also performed Chausson Poeme with the Texas Festival Orchestra, Val-de-Charante, Banff Music Center for the Arts, Kneisel Hall, Schleswig-Holstein, Duo Masterclasses at Lausanne, and the International Music Seminar at Prussia Cove. In 2000, she won the Frank Huntington Beebe Grant allowing her to continue her studies abroad to Cologne, Germany.

Upon her return to the states, she has served on the violin and chamber music faculty of the Music Institute of Chicago where she also acted as Program Director of Chamber Music. She has performed on the Dame Myra Hess and Sunday Salon Series, NEIU's Mostly Music and Jewel Box Series, and Music in the Loft which was also broadcast live on WFMT radio. Before relocating to San Francisco in 2010, she previously was a member of Camerata Chicago, the Wisconsin Chamber Orchestra, and ProMusica Chamber Orchestra where she collaborated in a performance of Mendelssohn's Octet with Vadim Gluzman.

In addition to her position with the Monterey Symphony, she's also a member of Santa Rosa Symphony, Symphony Silicon Valley, Monterey Symphony, and substitute violinist with San Francisco Symphony, San Francisco Ballet, and Opera San Jose. An active freelancer and chamber musician, she is a member of Divisa Ensemble and guest artist with Music at the Mission in Fremont. She has also performed in the Broadway shows "Soft Power" and "Charlie and the Chocolate Factory." Ms. Wie holds degrees from Rice University and The New School's Mannes College of Music. Her principal teachers include Sergiu Luca, Daniel Phillips and Josef Gingold.

On July 1, 2020, the Symphony Board elected Bruce Lindsey to a one-year term as Board President. Lindsey is a Chicago native, a graduate of Chicago Public Schools, the University of Wisconsin, and the University of California, Berkeley, School of Law.  He was a US Army Infantry officer at Ft. Ord, and is retired as a Colonel in the US Army Reserve.  Bruce is a former Monterey County Deputy District Attorney and was a Board member of the Washington Union School District for 16 years.  He is retired from many years of bankruptcy and reorganization practice in Monterey County and the Bay Area, a State Bar Certified Bankruptcy Specialist, during which time he also was a lecturer and author on bankruptcy topics.  He is married to Elizabeth “Whiz” Lindsey, and they have three grown children, Ellen, Jim, and Chris.  He has been a Monterey Symphony subscriber since 1972 and a Board member since 2006.

Sponsored by: Beverly and Lyman Hamilton