The Award-Winning “Anything Goes -The Musical with Music and Lyrics by Cole Porter” Coming to The Golden State Theatre on November 29th and 30th & December 6th and 7th, 2014 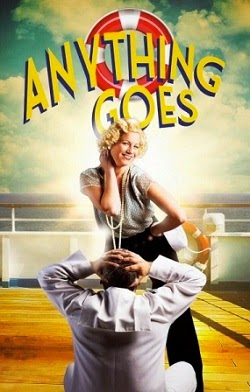 Bring your friends and your family for a fun professionally produced live theatre experience with great talent, beautiful sets and vintage costumes! Enjoy a chance to step back in time and dress in glamorous 1930’s attire. Sip and savor special 1930’s inspired cocktails including “Anything Goes Cosmopolitan”, “Salty Dog” and the “Sea Breeze”, among others, at the Golden State Theatre bar before and during the show. Red Velvet cupcakes will also be available as Red Velvet Cake originated in the 1930’s at the famous Waldorf-Astoria Hotel in New York. The Golden State Theatre allows purchased food and drink to be enjoyed at your seats within the theatre. Those attendees who come to any performance in their 1930’s attire will be entered to win special prizes, including a subscription to next year’s season of Broadway by the Bay performances at the Golden State Theatre.

Anything Goes is produced by Broadway By the Bay, a theatrical non-profit 501(c)3 organization that has been professionally producing award-winning musicals for nearly 50 years. For tickets, go to www.goldenstatetheatre.com or call (831) 649-1070. Group ticket discounts are available for 10 or more.

About Anything Goes:
All-aboard! Set sail with us from New York to London in the famous Cole Porter musical, Anything Goes (1934), featuring well-known hit tunes such as, "It's De-Lovely"," You're the Top", "I Get a Kick Out of You", and the famous title song, "Anything Goes." Reno Sweeney jumps on board the S.S. American and heads out to sea with a cast of singing sailors and criminals in disguise. A case of mistaken identities and broken hearts adds to this classic romantic comedy and its ultimate happy ending. Don’t miss it! Winner of 6 Tony Awards and 9 Drama Desk Awards, this is a musical that is sure to delight and entertain all ages!

This popular musical has been made into several Hollywood films and performed numerous times over the years on Broadway and in London theaters, including a film with Monterey’s own, Bing Crosby. The musical has long been a popular choice for school and community productions here as well. Cole Albert Porter (June 9, 1891 – October 15, 1964) was a world-renowned American composer and songwriter who left a musical legacy for generations to enjoy. For more information about the life and accomplishments of Cole Porter, go to http://en.wikipedia.org/wiki/Cole_Porter

About Broadway by the Bay:
Broadway By the Bay inspires, educates and engages the community and local talent through the power of musical theatre. Broadway By the Bay was established as San Mateo Community Theatre in 1965. They are the only major musical theatre company between San Francisco and Palo Alto producing largest scale musical productions using local talents. They are committed to producing the highest quality shows while maintaining accessibility to our community through affordable ticket prices. In their 49-year history we have received numerous awards and countless acclamations, but none as valued and important than the continued patronage by our community. They are the resident musical theatre company of the historic Fox Theatre in downtown Redwood City owned by Lori and Eric Lochtefeld.

The Golden State Theatre is located at 417 Alvarado Street in downtown Monterey and has many outstanding events coming up in 2015. To arrange any interviews, please call Wendy Brickman at (831) 633-4444 or email Brickman@BrickmanMarketing.com. For more information and to be added to their newsletter list, go to www.goldenstatetheatre.com.