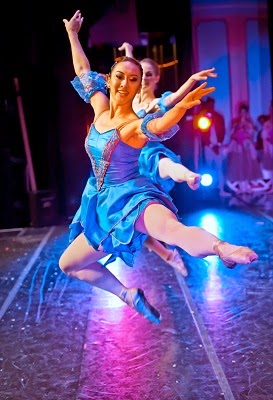 Don't miss this timeless holiday classic! Enjoy two outstanding performances of everyone's favorite, The Nutcracker. Performed by the award-winning San Francisco Bay Area Peninsula Ballet Theatre, a company that has been creating joyous holiday memories for over four decades, this year is no exception as they bring their annual holiday treat to Monterey.

Delight and enchant your entire family at this lavish performance featuring some of the SF Bay Area's most beautiful, talented and athletic professional dancers with gorgeous costumes, great sets and amazing choreography. And, enjoy meeting the dancers on stage following every spectacular finale!

Ticket prices range from $25-$40. For tickets, go to www.goldenstatetheatre.com or call (831) 649-1070. Bring the whole family! Group ticket discounts are available for 10 or more. There is convenient nearby parking in several City of Monterey parking garages in addition to street parking.

About The Nutcracker:
Peninsula Ballet Theatre is very pleased to bring its beloved version of The Nutcracker to the Golden State Theatre. “The moment we heard that Eric and Lori Lochtefeld were adding the Golden State to their venues we knew we wanted to be part of this great creative adventure,” said Christine Leslie, President and Executive Director of the ballet company. “We have partnered with them for all four years since they became the owners of the Fox Theatre in Redwood City,” she continued. “We love the charm and the atmosphere of these historic theatres, as do our audiences.”

After making two trips to the Golden State Theatre, the Peninsula Ballet Theatre’s artistic and technical team knew there was no looking back.

“The Golden State Theatre is set up differently than the Fox Theatre so we will be making some slight changes to our choreography to suit the stage size,” said Artistic Director David Fonnegra. “Carlos Carvajal, The Nutcracker choreographer, and I began creating on the spot how to make these changes that will bring the audience closer to the choreography and take advantage of the unique beauty of the venue.”

The Peninsula Ballet Theatre is bringing its entire cast including professionals and student performer from the Company Conservatory. Over 125 costumes characters bring the story of the Nutcracker to life. The technical team arrives on Monday before the performance to begin the transformation to Victorian Scotland. The students portray the friends and family of Clara and Fritz Silverbaum who attend everyone’s favorite holiday party filled with presents, dancing and special entertainments from Dr. Drosselmeyer. Clara’s holiday dreams are fulfilled by dancing by the company’s professional dancers and artists.

Choreographed by Bay Area dance legend and Isadore Duncan Dance Award winner, Carlos Carvajal, this Nutcracker has become a favorite of audiences throughout northern California and is sure to delight audiences in the entire Monterey Peninsula region.

The Company plans on bringing more than just Nutcracker to the Monterey area. Additional Productions will be announced at a future date. “When we have toured this production to Oakland, Pittsburg and Reno we have historically integrated local dance students into the production. We hope to be able to do so for future Nutcracker and other productions,” continued Fonnegra.

“This is a logical progression for a Company that has been delighting audiences for 44 years,” added Leslie. “We are looking forward to being part of this creative adventure in Monterey.”

About the Golden State Theatre:
In 1926, a 15,000 square-foot Moorish castle rose on Alvarado Street, to the amazement of locals and visitors alike. A new cinema and live performance venue to rival those in California's largest cities, the Golden State Theatre , which was built by the Reid Brothers, was the definition of an opulent movie palace. After decades of deterioration, it was faithfully restored to its former glory, featuring an Old World grand lobby and mezzanine, one thousand plush velvet seats, state-of-the-art sound, and the indefinable magic of a truly historic setting. B.B. King, Bill Cosby, Willie Nelson, Yes, Patti Smith, Bob Weir and The Smothers Brothers — these are just some of the names that have graced the stage, contributing to the Theatre's new legacy since its renovation and exciting revival. The community is invited to attend a world-class concert or musical at the Golden State Theatre, or host their own special event here, and become part of its new chapter of history.