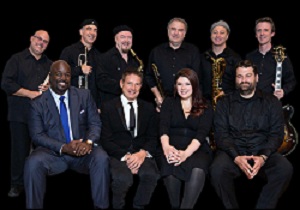 A blend of contemporary and traditional 1920’s jazz, band leader Alex Gershman and Sasha’s Bloc will transport you back in time to the feel good times of the roaring ‘20s in this new single with its simple, conversational verses, polished production and standout solos from trumpeter Kye Palmer and guitarist Steve Cotter capturing the styles and excitement of the past.

“Feels Like Jazz” by Sasha’s Bloc earns it place on your iPod by being what it intends to be: simple jazz fun.” –Gig Band

“Feels Like Jazz” is set for release on July 7th with an accompanying music video – exclusive footage from the band’s Heart on Fire release party shot in Los Angeles at Herb Alpert’s Vibrato Jazz Club.

Sasha’s Bloc is an amalgam of varied artists, nationalities and experiences, all fueled by bassist and songwriter Alex Gershman to deliver a sound that is consistently big, boisterous, and full of spirit.

With a big-band sound that recalls the vibe of New Orleans’ Preservation Hall Jazz Band infused with the blues, a hint of Gypsy Jazz, contemporary jazz and swing, Sasha’s Bloc have been playing to sold out shows across Southern California for the past two years and have developed a loyal following across the country.