SWEET HONEY IN THE ROCK, the Grammy-nominated a cappella ensemble who've built a legacy for merging an inimitable and distinct harmonic vocal blend with a veracious commitment to activism

New York, NY, July 01, 2015 - SWEET HONEY IN THE ROCK, the Grammy-nominated a cappella ensemble who've built a legacy for merging an inimitable and distinct harmonic vocal blend with a veracious commitment to activism, social justice, equality and freedom are returning to Australia for a mini-tour July 8th - July 18th. The tour will be highlighted by their special guest appearance at the 12th Annual Festival of Voices scheduled for July 2-12 in Hobart, Tasmania. The Festival attracts thousands of singers throughout Australia who learn new repertoire and skills, work with exceptional teachers, meet fellow vocalists and choristers and perform at the host venue, the Music Recital Hall in Hobart. Sweet Honey will be hosting workshops from July 8th - 12th. They will headline their own concert at the Music Recital Hall on July 10th and deliver an abbreviated performance with some of featured choir participants as part the Festival's finale concert on July 12th. 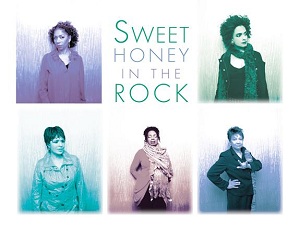 Sweet Honey will also perform major concerts at the Princess Theatre in Launceston, Tasmania, July 14th, City Recital Hall in Sydney, July 16th and the Melbourne Recital Hall in Melbourne, July 18th. The ensemble last toured Australia in 2013 which was highlighted by their performance at the internationally renowned Byron Bay Bluesfest.

"We're truly honored and excited to be invited by The Festival Of Voices to share the power of our unique musical offerings and global experience," stated Carol Maillard, one of the group's founding members. "We're looking forward to collaborating with all the choral ensembles in the workshops and performing concerts for our loyal Australian and Aboriginal fans in Hobart, Launceston, Melbourne and Sydney."

Sweet Honey will be jetting to Australia fresh from the recording studio in their home base of Washington, DC. The ensemble has been putting the finishing touches on their first album comprised of primarily original songs since "Go In Grace," (released in 2008 as the soundtrack for the Alvin Ailey Dance Company's 50th Anniversary theatrical piece of the same title). Their new album will also feature several notable cover songs from their live show of which they are recording for the first time. The album is set for release this fall on Appleseed Recordings.

Last month the group completed their fourth international US Embassy tour this year in Swaziland. They were previously invited by the US Embassies in Ethiopia, Peru and Jamaica in February to help them honor and celebrate Black History Month.

They performed several major concerts and contributed to community programs sponsored by the Embassy in each respective country. Last year, Sweet Honey made their premiere US Embassy tour (August 27- 31) as part of the Arts Envoy program to Belize. The Arts Envoy Program is a longstanding outreach program and initiative sponsored by the US State Department.

One of the major highlights of their visit to Swaziland was their debut appearance at the MTN Bushfire Festival (May 29-31) which featured a special collaboration on two songs (one by each artist) with noted songwriter/singer Floewe (real name Fikile Dhladhla) a native of Swaziland. CNN recently noted the Festival is one of the top seven "must attend music festivals" in Africa.

For further information about SWEET HONEY IN THE ROCK go to: www.sweethoneyintherock.org