Salinas, CA, June 16, 2016 - Prisons and the wine industry don't have a whole lot in common. Unless you're Greg Bergersen and Rick Quesada, that is. 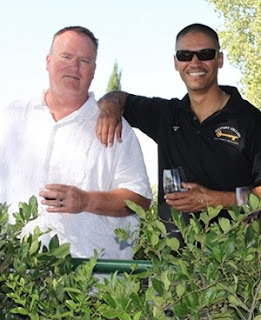 And to press the prison-wine connection even more, the tagline for their wine business is, “Solitary Cellars - Wines Without Restraints.” Their wine club is called the Chain Gang, with two levels, Minimum and Maximum Custody. You get the picture.

So how do two longtime law enforcement veterans get into the wine business, a notoriously difficult and fickle endeavor, even for those with experience and expertise in wine and winemaking?

Almost by accident, as it turns out.

“I used to make wine at home under my own label, Bergindi Cellars. Bergindi Cellars was a combination of my work nickname, Bergie and my wife’s name, Syndi. As a home winemaker, making wine was a hobby I enjoyed,” says Bergersen. “I was a member of a local winery's wine club and we would talk about winemaking. As a member perk, they would test my projects in their lab, which was quite small. From there we were asked if we would be interested in developing a brand, and of course the opportunity was too great to let pass. And from there Solitary Cellars was born.

Before long, their wines were outselling the winery's own wines and the winery owner started to put restrictions on the duo, which caused a bit of a conflict.

“So we decided to go into business for ourselves,” says Bergersen about the partnership with Quesada. “We're cut from the same cloth and we work well together. Working in a prison setting allows us to see each other in various situations and under different pressures. We having been tested in critical situations and we see things similarly, so it seemed like a good fit. I deal with the wine, Rick deals with the customer service and loyalty. We just wanted to build a professional business we could be proud of and which represents the standards of all law enforcement professionals.”

Neither of them had any business background, so they basically learned on the job, by trial and error, which Bergersen admits was a “laborious process,” especially the seemingly endless paperwork. “Our business model is simple and tested, make the best wine from the best fruit possible, present the finished product at an appropriate value and provide the absolute best experience. If we do that, the rest will fall into place.”

“It was relatively low risk and it wouldn't be a big loss (if the business failed),” says Quesada, whose prison nickname is “Q.” “We started with three varietals, gained some momentum and soon outgrew the place we were in. We moved our production to Lodi, California because of location and the abundance of high quality fruit from exceptional growers. We then leased the North Block Tasting Room in the ApCal (Appellation California) event center, located in Madera, California for our tasting room.”

The business is a two-man job, with some help from their wives and friends, or as Bergersen puts it, “We do everything.”

“We're probably the only tasting room of its kind in the world,” says Bergersen. “But for us it's all about the wines. We want the experience to be the wine. But we do have a bazillion stories!”

Married for 28 years with a 26-year-old daughter who is a nurse, Bergersen spent 25 years as a state prison corrections officer before retiring in 2014 from his position as a Lieutenant. In 2010, Bergersen was named the California Department of Corrections and Rehabilitation Supervisor of the Year. He retired from Valley State Prison as the institutions Public Information Officer and Administrative Assistant to the Warden.

Quesada served four years in the U.S. Army before joining the California Department of Corrections in 1996. Quesada has a resume that is vast and diverse. Quesada could be the most highly trained Lieutenant at Valley State Prison. He is married with a daughter and two sons and lives in Fresno.

“Our business model is to focus on the regions that grow the best varietals,” says Quesada. “There's the old saying, ‘All good wines start with good fruit,’ so we focus on the growers. We establish relationships with growers. We want to work with the growers with dust on their boots. Our Tempranillo and Albariño are from Markus Bokisch Vineyards who was voted 20 Most Admired Wine Grape growers in North America by Wines and Vines magazine.”

“When people come in, they're shocked at the quality of the wines,” adds Bergersen. “We attribute that to great growers in great growing regions.”

The wines are targeted to consumers directly in the tasting room, online and in select restaurants and wine bars.

“We are very concerned with the branding of Solitary, we're very conscious of where it's marketed and our brand as a premium wine,” says Bergersen. “There are three areas work very hard at, we manage costs, we provide an exceptional product and experience and we work harder than everyone else.”