“Stand Up” is the latest single from Sigler’s critically acclaimed 2015 CD, ‘Bundino’

Los Angeles, CA, July 27, 2016 - Four-time Grammy winning producer-singer-songwriter Bunny Sigler is proud to announce the release of his newest single, “Stand Up”, from his critically acclaimed 2015 album Bundino. “Stand Up” will be released on Friday, July 25. The prolific songwriter who helped shape the legendary “Philly Sound” hopes the track will serve as inspiration to his listeners to do what’s right. 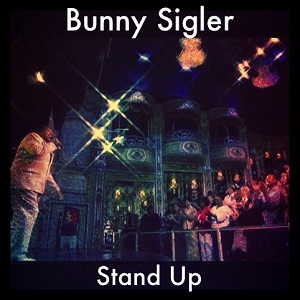 “Stand Up” is an anthemic and extremely danceable song thanks to Sigler’s inspiring lyrics and the stellar production by Sigler and collaborator Noisette “Saint Man” St. Jean Jr. Sigler also turns in a vocal performance fully deserving of his “Mr. Emotion” nickname, all while stressing the importance of equality, education and respect. According to Sigler, the track “portrays the message that one should always stand up for his or her beliefs.” The closing track to Sigler’s latest album, Bundino, “Stand Up” features an infectious beat and soaring chorus that cement the song as an inspirational summer jam for fans of R&B, pop, and dance music.

Complete with soulful ballads, nostalgic and funky songs, Bunny Sigler hones in on a contemporary sound with his latest album Bundino, which delivers 14 brilliant R&B tracks. Released in May 2015, the album features Sigler’s signature croons and songwriting while paying homage to his 50+ year career in the music industry. Sigler also has a wide variety of videos available on his YouTube channel at: https://www.youtube.com/user/MrBunnySigler/. After recent performances in New Orleans, Philadelphia, and Spain, Sigler is ready to hit the road again and bring his live performances worldwide.

“…Sigler has no problem with shaking things up, and he demonstrates his comfort with envelope pushing through Bundino.” –Soul Tracks

About Bunny Sigler:
Bunny Sigler was born in Philadelphia, Pennsylvania on March 27, 1941. The industry gave him the nickname “Mr. Emotion” after his heartfelt performances on stage. Rising to prominence with the Philly soul sound in the 1970’s, Sigler got a chance to work with a number of acts as a writer and/or producer, including the Whispers, Ecstacy, Passion And Pain and Carl Carlton. He cut tracks for artists on Curtis Mayfield's Curtom label, including Mayfield himself ("Trippin' Out"), and song on a duet album with Barbara Mason. In 1976, Sigler set up an album deal for Instant Funk with Gamble and Huff's TSOP label.

Creating several hits over the span of his career (many of which are still being sampled in today's generation), Bunny continues to write, produce and record new material. He is the co-writer of the song “The Ruler's Back” which was an opening song for Jay Z's album, "Blueprint". Even at over 70 years old, "there ain't no stopping us now" claims Sigler, as he gets ready to release “Stand Up,” the next in a long line of hit songs.

For more information, to request an interview, or for a review copy of “Stand Up” or ‘Bundino’ contact: