Los Angeles, CA, July 26, 2016 — Rock & Roll Hall of Fame inductee Ann Wilson is set to release her second solo EP, The Ann Wilson Thing! #2 - Focus, on Rounder Records. Featured tracks on the EP include live recordings of Jimi Hendrix’ “manic depression” and Peter Gabriel’s “don’t give up”, as well as two Wilson-penned tracks, the folk-inspired “fightin fer life” and the bluesy “anguish”. Guitarist Craig Bartok co-wrote both of these original songs with Wilson. 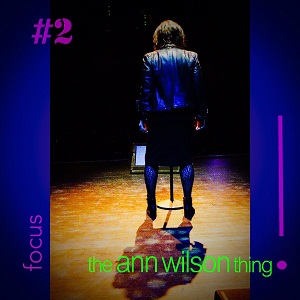 “manic depression” sees Wilson and the group paying homage to a blues-rock legend in Hendrix while introducing Wilson’s own flair. “fightin fer life” recalls some of Heart’s more folk and acoustic inspired tunes but features the harder edge that The Ann Wilson Thing! is known for. The Ann Wilson Thing! #2 – Focus is now available physically via theannwilsonthing.com and at all digital/steaming outlets. The CD will be available at all physical retailers on August 12.

Wilson is also announcing a solo mini-tour of Florida, to take place after Heart’s Rock Hall Three For All tour (with Cheap Trick and Joan Jett) concludes in mid-September. The first show will be at the King Center for the Performing Arts in Melbourne, FL on Sept. 27 and will be followed by shows at Plaza Live in Orlando, FL and the Pointe Vedra Concert Hall in Pointe Vedra, FL on Sept 27 and Sept 28, respectively.

As a songwriter and lyricist, Ann Wilson has created a truly impressive body of work (“Crazy on You,” “Barracuda,” “Magic Man,” “Dog & Butterfly,” “Straight On”, “Even it Up,” “Mistral Wind,” and many, many more). However, her greatest gift, and first “calling” is singing and with this intimate tour, she prepares to blow away her fans with up, close and personal, raw performances of blues and rock songs. The Ann Wilson Thing doesn’t replace Heart but it is a new experience for existing Heart fans, as well as for new fans who will love these songs.