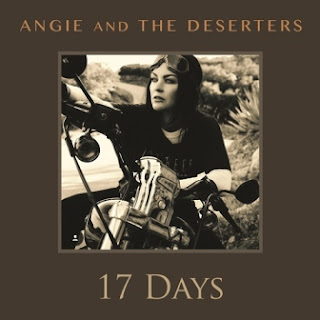 In “17 Days,” Angie highlights the times when she was constantly on the road and was touring from city to city. Bruyere describes the typical scenarios of a ‘rolling stone’ as she sings about the liberating feelings of being on the move while leaving new lovers behind, writing music and bonding with her band members. The new single evokes music nostalgia by blending classic upbeat rhythms with notable guitar pedals. Drawing inspiration from artists like Tom Petty, The Rolling Stones and Willie Nelson, the band creates a fiery Americana and alternative sound all of their own. Lead vocalist Angie Bruyere continues to reveal her innocent yet gritty vocal tones that flare with a country rock bite.

With each release the band continues to raise an impressionable impact on its listeners and media. Their most recent single “Forgetting to Forget” debuted at #1 on the Radio Indie Alliance Charts and slotted at #7 on The Alternate Root’s ‘Top 10 Songs of the Week’ while No Depression noted “Angie and The Deserters are a driven and charismatic band with a passion for beautiful melodies and energetic hooks.”