MAX Agency has met and recruited Toronto Models and Toronto Actors from all walks of life. We spoke with Myles Deck, a Toronto MAX Talent.

Toronto, ON, September 04, 2014 - MAX Agency has met and recruited Toronto Models and Toronto Actors from all walks of life. We spoke with Myles Deck, a Toronto MAX Talent. Myles moved to Toronto a couple of years ago after graduating from University to pursue his music career when he was scouted on the street, “I’d always get comments about pursuing modeling and background acting and two years ago one of the MAX Agency scouts ran into me and gave me a card. So I took the chance and signed up with them.” 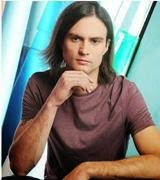 I asked Myles about his education aside from his degree in biology from Acadia University and asked if he has studied acting and he had this to say,

“I’m considering taking acting classes. I am a musician. I’m a drummer primarily but I dabble in different areas of music. I started playing piano when I was a little kid and the guitar and I teach little kids music as well. I’m in a band right now. It’s a heavy metal band called Cauldron and we just started working on a new album. It will be a self release.”

Myles was a newcomer to the acting and modeling world when he came to MAX Agency a few years ago and we asked how things have been with MAX Agency so far, “So far I’ve had a few auditions and I got a job doing a commercial for Jose Quervo titled ‘Have a Story’ and it starred Kiefer Sutherland. It was very professional on the set and there was always someone there to tell me where I needed to be. It was very organized. They looked after the actors’ petty well and they kept who the star was a secret and then Kiefer Sutherland walked into the room and the energy changed.”

As a result of being cast in the Jose Quervo commercial Myles Deck was able to earn his first ACTRA credit and become an ACTRA Apprentice, “I thought about joining the union for sometime. I got some literature and read up on it and thought may be it would open some more doors.”

Beyond Myles commercial which has become a wild success and has resulted in some pretty handsome residuals Myles is optimistic about making Toronto acting and Toronto modeling a part of his career alongside music and Arts and Entertainment as a whole, “Things have been good with MAX and very professional overall. I would love to take the free acting course with The Talent Shop Academy and I’m looking forward to more auditions.”

MAX Agency’s Bookers are currently looking for new Talent! If you are interested we highly recommend visiting maxagency.com and filling out an Application. Wishing MAX continued success in the industry we’re looking forward to future press releases featuring individual talent and projects and finding out more about MAX!