Southern California based band Angie and the Deserters introduce their highly anticipated EP, You, which will be available on October 7, 2016 through Topanga Canyon Records.

Los Angeles, CA, October 06, 2016 - Southern California based band Angie and the Deserters introduce their highly anticipated EP, You, which will be available on October 7, 2016 through Topanga Canyon Records. The six-song collection includes the first released single and the title-track “You”. The EP is a follow-up to this year’s Blood Like Wine record, which featured hit lead singles, “Country Radio” and “The Gift” and represents the second half of their recent Nashville recordings. 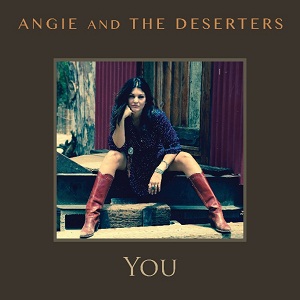 Angie and the Deserters consistently display a high sense of quality and professionalism throughout their brand from their music, to their music videos and to their artwork. The cover photo on the You record features lead vocalist, Angie Bruyere which was taken by the legendary rock n’ roll photographer, Henry Diltz.

Diltz has worked with legendary artists such as The Eagles, Neil Young, Linda Rondstadt, The Doors, Jimi Hendrix, and so many more.

“Having the experience of spending the day shooting with Henry Diltz was a dream for me. He really captured me in a way that no one else has,” Bruyere says.

In their second EP, Angie and the Deserters continue to illustrate their raw California sound with their dreamy guitar riffs and gritty vocals. The band dives into the second chapter of Angie’s poetic lyricism and demonstrates a creative connection with their unique sound. You crosses genre lines and mixes the EP with half Americana oriented songs and the other half layered with alternative country influences. Angie’s gravelly and rule breaking vocals are complimented by the Deserters’ (Kyle Stevens, Danny Hulsizer, & Chris Lawrence) compelling instrumentals. Together the group evokes vivid imagery and brings their heartwarming stories to life.

“The impeccable production puts everything forward with a bright sheen, but there’s plenty of bite here for even the biggest sound merchant. Angie and the Deserters can coax deep feeling from their songwriting and instruments, but they are equally capable of harnessing considerable firepower when the moment calls for it.” – No Depression

The band’s title-track, “You” describes a time of realization in a withering relationship. Bruyere’s chilling vocals reinforce that the recurring secrets must end and that it is time to move on without her loved one. Their upcoming music video tells the story of an old married couple that begins to grow apart. The older woman must leave behind the man she once loved. Filmed in Bandit Town, California, the “You” music video was directed by Michael Schmidt (21 Days Under the Sky).

It is no question that the band injects pure passion into their music and sets a unique listening experience to their audience. Angie and the Deserters’ set an impactful mark into the scene with their first music video, “Country Radio” which reached over 32K views on Facebook and YouTube. The band’s second single “The Gift” debuted at #1 on Radio Indie Alliance charts the first week of its release. The band was also featured and reviewed by The Country Startpage, The Alternate Root, Fender and more. Be sure to keep an eye out for the band’s upcoming singles “Forgetting to Forget” and “Stay” off the You EP.