Cleveland-born baritone Elijah Rock is pleased to announce the IndieGoGo campaign for his newest album, ‘Gershwin For My Soul’.

Los Angeles CA, October 14, 2016 - Cleveland-born baritone Elijah Rock is pleased to announce the IndieGoGo campaign for his newest album, ‘Gershwin For My Soul’. Ongoing through October 20, 2016, the singer’s campaign hopes to raise $40,000 for the promotion of the recently recorded traditional pop album. Fans and supporters can donate via IndieGoGo.com and Rock has made exciting perks available to those who donate at every price point. These perks range from a $5 single download and facebook shout out all the way up to a $5,000 VIP trip (including airfare) for two to an Elijah Rock performance along with a variety of Elijah Rock merch. 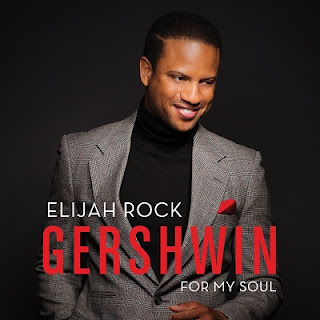 ‘Gershwin For My Soul’ represents a full circle journey for Rock, as he sang to his first Gershwin songs at 16 in “Porgy & Bess” at the Cleveland Institute of Music. Over the years, Rock has continued to return back to the classics penned in the early 20th century by Ira and George Gershwin. Carrying this art forward, Elijah Rock dove into this project with relish and the trio of producer/arranger/pianist Kevin Toney, bassist John B. Williams, and drummer Greg Paul, plus guitarist Jacques Lesure in the west coast jazz sanctuary of Nolan Shaheed’s studio.

The 12-song CD opens with “S’Wonderful,” a tender fitting contemporary take a la Al Jarreau. “Fascinatin’ Rhythm” and “Our Love Is Here To Stay” are drenched in that punchy syncopated manner that most recalls their original era, the latter with some of Toney’s signature piano flourish. “I Can’t Get Started” swings and chugs with a four on the floor groove while the lovely “Long Ago and Far Away” floats on a slow hot wind bossa beat. Elijah milks the rarely heard extended introduction to “How Long Has This Been Goin’ On” before it falls like feathers into the brushed blues of its well known verses.

The second half of ‘Gershwin For My Soul” is where more chances are taken. The title track – the sole original penned by Rock and Toney – is a hip churchy blues where Elijah testifies his fascination with all things Gershwin. It’s followed boldly by “Tchaikovsky (And the Russians),” a hip hop swing interlude perfect post the Tonys-sweeping genre bending musical “Hamilton”. And Elijah brings his tap shoes in for solo and drum-dueling duties on the revival rave-up stomp “I Got Plenty O’ Nuttin’.” Most movingly, the focus becomes sheer aural nudity on a trio of ballads Elijah submerges in into that shat showcase the full resonant beauty of his voice and his skills of interpretation from the acting world. They are the relaxed and romantic “Shall We Dance,” the parlor song swoon of “Love Walked In,” and the tour-de-force closer “Isn’t it a Pity,” a bluesy ballad wish of delicious diction and a heart-stopping dip into a cinematic so long.

“Before this experience, I hadn’t really embraced the balladeer aspect of my gift,” Rock reflects. “It was about me being vulnerable enough to know I could do it. It’s been an interesting transformation… everything slowed down. There’s space for introspection and that moment to moment feeling of the lyric. I fell in love with the space between the notes and the simplicity of telling the story.”

Rock – whose resume boasts a decade and a half of acclaimed, across-the-board accomplishments in stage, film, and television – found the perfect collaborator in Kevin Toney whose work as a keyboardist, composer, arranger, author educator, a co-founder of the 70s R&B-Jazz group the Blackbyrds provided the optimal springboard for Rock to bounce concepts off. ”Kevin Toney is a virtuoso whose experience speaks for itself,” Rock says. We brought our authentic creative selves to the material and in that it because uniquely ours.”