New York, NY, November 22, 2016 — Bluesy-pop singer-songwriter, Brielle Von Hugel, who signed a recording contract with F.R.E.E.D.O.M. Records in July, has co-written a new breathtaking ballad entitled, “Naked.” The single will be released on November 22nd with an accompanying music video. 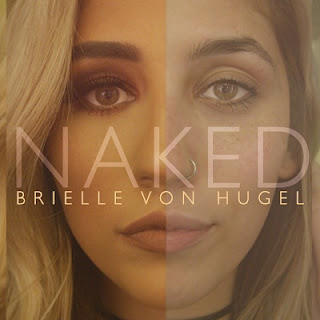 Brielle brings a refreshing emotional depth to the pop scene with her sophisticated voice and natural storytelling. In her latest song “Naked,” Brielle’s powerhouse vocals delicately belts over a stripped down solo piano. She describes that intimate phase of a relationship when a partner feels comfortable enough to expose their true self. Brielle wipes away her makeup to reveal her physical flaws as well as her internal imperfections. Her metaphorical yet, sincere songwriting peels back the layers of her past and sends a deeper message that encourages listeners to be themselves.

Also known for her well received cover songs, Brielle’s YouTube videos have amassed over 2 million views covering artists such as Adele, Paramore and Sia. Furthermore, Brielle has been featured on sites such as Billboard.com, Mashable, RyanSeacrest.com and Hollywood Gossip.
In collaboration with TE Music Group & F.R.E.E.D.O.M. Records, Brielle is currently in the studio working on her sophomore EP coming out later this year.

About Brielle Von Hugel
New York based singer-songwriter was heavily inspired from music at an early age. Brielle singer/songwriter mixes pop-edge with yesterday’s bluesy, smoky tones to give her musical storytelling grit. Her powerful pipes have garnered her multiple television and press appearances such as; FOX’s Good Day New York, Industry Magazine, and various fundraisers. At age 16, Brielle was one of the Top 12 girls’ semi-finalists on Season 11 of American Idol. Brielle has reached over 17K YouTube subscribers and over 31K Spotify monthly listeners. Her growing audience looks to her for guidance as she continues to release liberating music that encourages individuality. For more information please visit: http://www.briellevonhugel.com/