“Misery Road”will be released November 18 and is the second single from the band’s debut full length album Fat Lot of Good, available now! 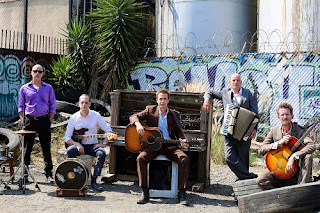 Cranky George describes “Misery Road” as “a song with a country flair” and says the song wears its “emotions on the sleeve.” The lyrics, sung by Dermot Mulroney, center around “a love affair gone wrong and a man leaving town to find answers” and the music video continues to explore this theme with a narrative following a man struggling with his love life and jumping in his car to escape. All of this action – including the band performing in a junkyard – is “set against a toe-tapping beat, led by a hooky accordion line.”

Recorded over a span of five years at bassist/producer Brad Wood’s Seagrass Studio, Cranky George’s debut full-length album Fat Lot of Good tips music from the bucket that dredges the confluence of the Danube, the Shannon and the Missouri. The album embraces fourteen songs, individually divergent, but which together ply a course from haven, round horn and back to harbor, by means of lullaby, torch song, sea shanty and murder ballad – an album which, with compassion, irony, humor and sometimes horror, tells stories of desire, love, loss, cruelty, ruination and pity. The music on the record, while diverse, features common threads such as Cranky George’s signature folk-inspired instrumentation – including accordion, violin, mandolin, acoustic guitars and ukuleles. Fat Lot of Good is available now via major digital outlets, on CD, and in a 450-copy limited edition double vinyl.

During this time, Brad Wood, who has produced records for artist from the likes of The Bangles, Ben Lee, Pete Yorn, and Veruca Salt, was added on bass. To round out the new line up of Cranky George, Sebastian Sheehan Visconti, a sound designer and sound effects editor who notably worked on the television series The Muppets and The Flash, joined on percussion. After five years of work, Cranky George’s full-length debut – Fat Lot of Good – is available now. Dermot Mulroney and other band members are available for interviews about the group.

For more information, to request an interview, or for a review copy of ‘Fat Lot of Good’ or “Misery Road”