Americana Alt-Country Rockers Angie and the Deserters Announce Second Single from their EP ‘You’, titled “Forgetting to Forget”- Impacting Radio on 11-18-16!

Angie and the Deserters remain unforgettable as they continue to release rousing singles that ooze with emotion and passion.

Los Angeles, CA, November 18, 2016 - Angie and the Deserters remain unforgettable as they continue to release rousing singles that ooze with emotion and passion. The americana and alt-country Los Angeles based band announces their second single from their latest ‘You’ EP entitled, “Forgetting to Forget.” The single will be available for radio adds starting on November 18, 2016. 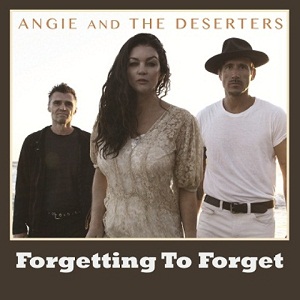 Angie Bruyere’s lush vocals and emotive lyrics will strike a chord deeply within the soul with this new single. The song reveals the moment when trying to escape memories from a past relationship. Although time has passed by, Angie continues to find herself hung up over a previous lover as she continues to look at their old photo and ring their phone. She expresses that she is getting by and “still standing” however she cannot seem to shake these thoughts. Bruyere paints a vivid emotional portrait of personal thoughts that listeners can easily relate to. Her delicate vocal delivery is laced over soaring violin strings and intricate guitar riffs that dive into a beautiful splash of percussion that will send chills up the spine.

The band has already received a significant buzz surrounding their follow-up EP and title-track, ‘You.’ The single charted #5 on the Radio Indie Alliance Charts and is airing on over 35 radio stations such as Radio Free Americana, WYAD (Jackson, MI), WNDY (Crawfordsville, IN), Pandora Radio and many more airplay outlets. The band’s “You” music video premiered on the popular Americana based website The Alternate Root and also on Variety Beat and reached over 25K views on FB and YouTube in the first two weeks of release.

“I wrote this song a few years ago, thinking it would be a simple acoustic song, but once we got into the studio with the band it became so much more,” says Angie Bruyere.

“Forgetting to Forget,” along with the rest of the tracks from the ‘You’ EP were recorded in Nashville’s Castle Recording Studios with renowned country producer Jeff Huskins (Clint Black, Keith Urban) and mastered by Grammy® Award Winning, Bod Ludwig (Rolling Stones, Led Zeppelin, Jimi Hendrix). For more information on Angie and The Deserters please visit the band’s official website at www.angieandthedeserters.com.

Email ThisBlogThis!Share to TwitterShare to FacebookShare to Pinterest
Labels: Angie and the Deserters, emotion and passion, Forgetting to Forget, Second Single, WNDY