Los Angeles, CA, March 30, 2017 - Following a successful run at the prestigious Folk Alliance festival last month, Americana songstress Amilia K Spicer is gearing up for her next single “Lightning,” from her new album Wow and Flutter (out April 28, 2017). “Lighting” will be serviced to radio this week and will go for adds in April. Spicer will hit the road later this month to visit radio stations across the country. Take a listen to “Lightning” here. Spicer will perform songs from Wow and Flutter on April 7th at her acoustic East of West show in Pennsylvania, which will also feature her photographs from Tibet, Nepal and other locales. In addition, Spicer will tour as a special guest with renowned singer/songwriter John Gorka in June. All tour dates can be found at amiliakspicer.com. 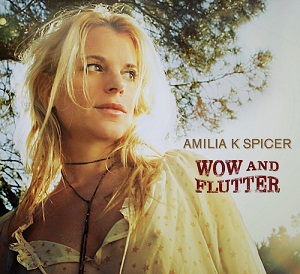 “Lightning” follows the first single “Fill Me Up.” The Bluegrass Situation premiered the “Fill Me Up” video, an atmospheric clip that finds Spicer reliving moments of her childhood in rural Pennsylvania, while singing the emotional track.

Wow and Flutter has earned early praise from Popdose, who called it, “One of the best albums, any genre, in the last decade.”

Critics have also previously raved about Spicer and her live performances:

“A fearless performer... in bars, at folk festivals, in house concert settings and in venues surrounded by classical musicians, Spicer has something smart to say." San Antonio Express-News

About Amilia K Spicer:
Called “fearless” by the San Antonio Express-News, Spicer drew attention the first time she played an LA club on a whim. She was quickly on her way-—to a rare Mainstage Kerrville Folk Festival debut, three Kennedy Center performances, song placements in several high-profile TV shows (Party of Five, Dawson’s Creek), and quirky indie films. In addition to recording Wow and Flutter, Spicer has also produced tracks for other projects. These include lauded contributions to compilations tributing Neil Young (alongside Kristen Hersh, Tanya Donnelly), and Peter Case (with John Prine,,Hayes Carll). She also appeared on the Safety Harbor Kids Holiday Collection, (Billy Idol, Jackson Browne). A sought-after harmony singer and arranger, Spicer is featured on albums by John Gorka and the final Rounder release from the late Bill Morrissey.