“Till I See You Again” is the first single from Sigler’s forthcoming Jazz & R&B album, “Young at Heart”

Los Angeles, CA, March 22, 2017 – Living legend, Philadelphia icon, and renowned R&B singer/songwriter Walter "Bunny" Sigler is excited to announce the latest addition to his ever-expanding discography – a new jazz single titled “Till I See You Again”. This song will be released on iTunes and all major digital retail outlets March 24 via Sigler’s own Bunz Music & Records label. “Till I See You Again” is the first single from Sigler’s upcoming album ‘Young at Heart’, which is slated for a summer release. ‘Young at Heart’ features Bunny’s fresh take on the genre of jazz, mixing tunes from the classic standards songbook with several of Sigler’s own compositions and his familiar R&B sound. Each of these tunes, old and new, features Sigler’s signature vocal performances that are bursting with emotion. 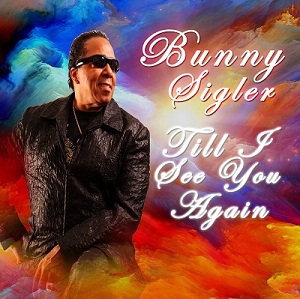 “Till I See You Again” is no exception, from the opening harmonies to the catchy chorus, this slow ballad gives Sigler a foundation on which he builds a sound with elements of classics and modern tunes alike. The classic instrumentation invites Sigler’s emotional and powerful voice to paint a truly heartfelt and sweet picture of a man longing for a “special friend” while the two are apart. Sigler notes he has dedicated the song to the late Marvin Morrow who co-wrote the song with Bunny. Tasteful and restrained “Till I See You Again” is a strong start to ‘Young at Heart,’ Sigler’s follow-up to 2015’s “Bundino”.

Lloyd Remick, Bunny’s longtime attorney and personal manager states, “Bunny has done a gospel LP, a Christmas LP and two “love and funk” LP releases over the past decade. With this new release, Bunny presents a standards and jazz album to show his complete versatility - he’s a rare and skilled musician.”

For more information and updates about ‘Young at Heart’ and Bunny Sigler, please visit his website at http://www.BunZMusicAndRecords.com.

About Bunny Sigler:
Philadelphia R&B legend Bunny Sigler continues to share songs that prove his passion for music goes well beyond his beloved soul songs. Bunny’s songwriting for tracks like Instant Funk's "I Got My Mind Made Up", Patti Labelle's "Somebody Loves You Baby", The Whispers' "Bingo", Jackie Moore's "Sweet Charlie Babe" and The O'Jays "Sunshine" are what put him on the musical map. Not only is Bunny skilled with the pen, but he is also a world-renowned singer.

This Philadelphia native began his singing career in churches all over the metropolitan area with songs like "O Lord My God" and "The Lord's Prayer". The industry gave him the nickname “Mr. Emotion” after his heartfelt performances on stage. Creating numerous hits over the span of his career (many of which are still being sampled in today's generation), Bunny continues to write, produce and record new material. He is the co-writer of the song “The Ruler's Back” which was an opening song for Jay Z's album, "Blueprint". Even at over 70 years old, "there ain't no stopping us now" claims Sigler, as he gets continues to write, record, and release new music on a regular basis.

For more information or to request a review copy of “Till I See You Again” please contact:
Chip Schutzman
Miles High Productions
chip@mileshighproductions.com
(323) 806-0400