New York, NY, May 23, 2017 - Brielle Von Hugel, Mario Jose and Michael Mancuso deliver their own version to the British electronic music group, Clean Bandit’s latest hit, “Symphony.” The cover single was released on May 1, 2017 on all digital platforms through F.R.E.E.D.O.M. Records. The accompanying music video was released later that week and is a follow up to her 2017 single, “Stronger.”

Brielle Von Hugel, Mario Jose and Michael Mancuso rejuvenate Clean Bandit’s “Symphony” with an energetic blend of harmonic verses and bold vocal talents. This emotional rendition describes a lost lover finally discovering their soulmate and metaphorically relating it to the immediate feeling of falling in love with a song that is continuously on repeat. Together this mesmerizing and powerhouse trio arouse new emotive depths and dynamical vibrations to the original. 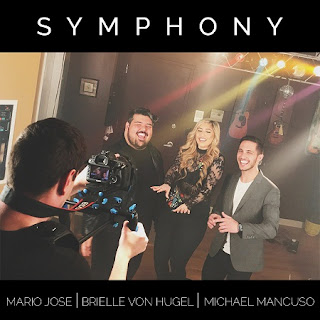 The opener of the music video is a beautiful and soft introduction of each of the remarkable voices featured on the song. Brielle gently enters the track with her soothing vocals that ease into the Mario Jose’s enchanting portion of the verse that is then followed by Michael Mancuso’s light-hearted touch that takes us well into the chorus. In a well-lit and glowing room, the three vocalists serenade into the camera with joyous smiles further emphasizing the positive and loving message beneath the song.

American Idol semi- finalist, Brielle Von Hugel has accumulated millions of YouTube and Spotify streams thanks to her countless original singles and cover songs. Hugel’s bold vocal pipes and unapologetic honest songwriting brings a bluesy pop-edge that will strike a chord deeply within her listeners. Brielle recently just wrapped her European tour with Scott Bradlee’s renowned swing and jazz band, Postmodern Jukebox. “She has a rare gift as a vocalist to combine old and new and still connect with the audience,” say Scott Bradlee.

San Francisco native, Mario Jose is a seasoned singer-songwriter, session vocalist and entertainer. Mario has had the privilege to share the stage and studio with music icons including John Legend, Prince, Meghan Trainor, Justin Bieber, Philip Bailey (of Earth, Wind & Fire), Postmodern Jukebox and many more! Funded by his fans on Kickstarter, Mario released his debut EP in 2016 which hit #33 on the iTunes Pop Charts.

Michael Mancuso is an upcoming artist who spent his college years at USC as a member of the award-winning A Cappella group, The SoCal Vocals. He has performed around the world at locations including the Hollywood Bowl and the White House in addition to touring through Hong Kong, Florida and New York City. Michael has worked with many notable artists including Grammy Award winner Hussain Jiffry, and has performed for artists including Taylor Swift, Jason Derulo, Imagine Dragons and more!