Blue Room is Cavier’s second full-length album, and the followup to 2016’s Premier release and contains the new single “When You Come Around”

Los Angeles, CA, May 10, 2017 – Pop singer-songwriter Jonathan Cavier is preparing for the release of his second solo album, Blue Room, which will be released via iTunes and all major digital outlets on May 12. Blue Room’s first single, “When You Come Around,” was recently released on April 21 and the video for the song will be released next week in advance of the full album. On “When You Come Around,” Sting’s influence can be heard as Cavier passionately sings about his desire to connect with someone special over an affective acoustic melody. There is raw emotion in both Cavier’s voice and lyrics on Blue Room showing an artist that has a deep strength in communicating emotion to his listeners. Blue Room’s sound is a continuation and maturation of the sound from Cavier’s first solo album, Premier, as both of these releases blend together pop influences from the 80s, 90s and music of today. On Blue Room, Cavier continues to “transport listeners to colorful three-minute worlds,” a process he started with the 2016 release of Premier. 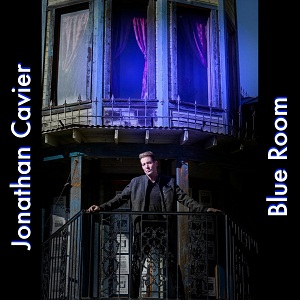 Cavier’s time in the atmospheric pop duo EyeTalk gave him years of experience and exposure in countries all over the world. With the maturation of his songwriting and composition and the wide array of generational influences on Blue Room’s ten tracks, one can see an artist truly coming into his own.

About Jonathan Cavier
Phoenix-based singer-songwriter and pop performer Jonathan Cavier is no stranger to writing catchy tunes that blend wide-ranging influences into a multi-faceted yet cohesive sound. Originally from Northern California, Cavier (“cav-AIR”) moved to Phoenix, AZ where he performed as Alan Clark in the atmospheric pop duo, EyeTalk. Over the course of 10 years and five albums, this venture saw their music reach international audiences in Italy, the UK, and Australia. After five albums and hundreds of shows played throughout the US, Alan Clark has reintroduced himself under the pseudonym Jonathan Cavier. With one solo album, Premier, already under his belt, Cavier further defines his sound on 2017’s 10-song release entitled Blue Room. In addition to his musical endeavors, Cavier is a semi-professional tennis player and a member of the USTA and IFT. Cavier says practicing and playing in tournaments is “the fountain of youth.”

For more information, to request an interview, or for a review copy of “When You Come Around” or Blue Room contact: