Orlando, FL, May 16, 2017 – Pop songwriter/singer Ashley J launches a new chapter in her emergence as contemporary pop artist with a brand new single, “Trapped.” The inescapable and smoky single is set for an independent release on all digital and streaming platforms May 19, 2017 via her production imprint, Bombshell Music, Inc. 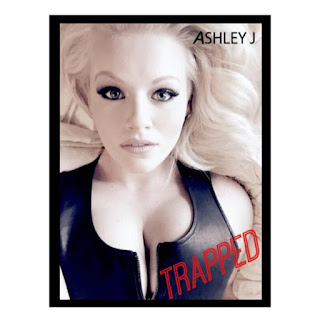 “Trapped” was written by Ashley J, who teamed up with legendary songwriter/producer and multi-platinum Grammy and Emmy winning, Narada Michael Walden, who produced her steamy single. Laced with mid-tempo snaps, shadowy synths and soft whispers; “Trapped” highlights a deep infatuation with a new partner. Ashley’s sultry pipes gradually build a gravitating tension throughout the song, until it hits the exciting and uncontrollable bridge which reveals her scintillating and broad vocal range.

Walden, who has produced a slew of hit records for vocal superstar Diva’s like Aretha Franklin, Diana the late Whitney Houston, among others, gives the burgeoning songstress a five-star rating, “Ashley J is a real American sweetheart with a big voice and lots of energy! She has soul and her beautiful smile lights up the room,” he noted.

For music fans of Selena Gomez, Sabrina Carpenter and Demi Lovato, “Trapped” offers her fans a compelling impression for what to expect from Ashley J’s debut EP coming out later this year.

Last year, Ashley J made her entry into the pop scene with her romantically charged single, “Dare Ya” which peaked at #3 on the Official European Independent Music Charts. The music video also received support and praise from Paste Magazine, EDM Droid, and Media Place.

In 2015, her debut solo single "One and One” reached Billboard's Top 20 Dance Charts. She followed that up with another dance record, “Cali” (Ralphi Roasio Remix) which debuted #1 on Billboard’s Breakout Chart the first week of release.

About Ashley J:
Growing up in Orlando, the multi-talented songwriter/singer was influenced by Celine Dion, Whitney Houston, Michael Jackson and her all time musical hero, Dolly Parton, Ashley J started songwriting and singing at a very early age. Her musical style intertwines unapologetic pop with enticing electronic melodies. She earned a BA degree in Business Law from the University of North Texas and attended the Dr. Phillips High School of Performing Arts in Orlando, where she scored leading roles in theatre, dance and musical productions.